Day 14 - Long Will Campsite to Ferryland

We awoke around 6 am to find a sunny and cool morning. As we got up, made our coffee and oatmeal, and started to pack we discovered that some small creature had eaten through the side of Sean's backpack to get the wrapper of a multigrain bar that was left in a pocket. This was a novice mistake that we shouldn't have made – now we have a repair job in our future.

We set off around 9 am through a lovely morning to finish the last 11 km of the Cape Broyle Head Path. An hour or so after leaving our site we came to Lance Cove, which had a beautiful beach where we spent some time watching Herring and Great Black-backed Gulls soaring, a group of Black Guillemots paddling and diving, and a pair of Common Loons fishing. 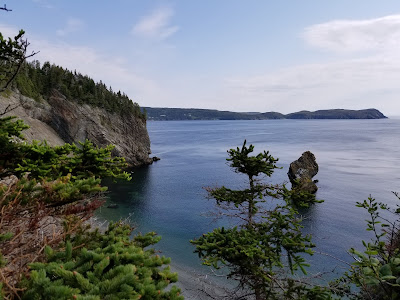 Although it felt like the trail was a little easier for the first part of the morning, we nonetheless spent a lot of time climbing, at times very steeply. It felt a bit unrelenting, especially combined with the mud, boulders, and fallen trees. Personally I don't enjoy hiking as much when it is impossible to look up from the trail, and every moment must be spent trying to figure out where to step. 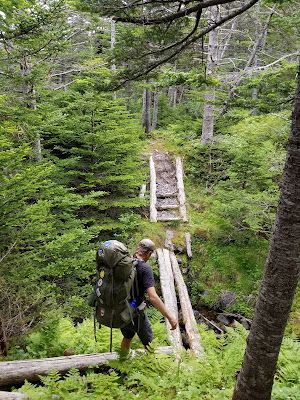 We did get a lovely and unexpected reprieve when the trail suddenly emerged onto the beautiful open grassland of Church Meadow. We stopped at the white picnic table there and enjoyed the breeze and panoramic view back down the coastline we had just walked. We spent a good half hour looking at the map and trying to guess which point was which. 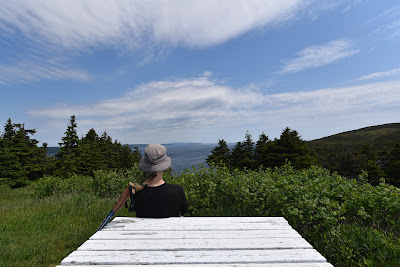 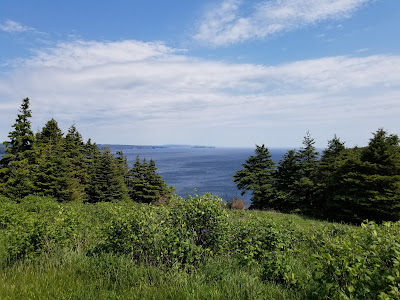 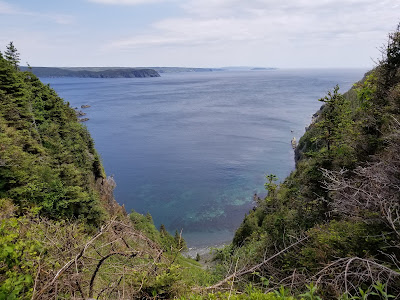 After the meadow the trail proceeded back into the trees, providing few glimpses of the ocean. I guess the trail earned its 'strenuous' rating from the continual ups and downs. At one point we ascended a river bed that made us grateful it was dry and sunny – I am pretty sure the loose soil and rocks, mud, and exposed tree roots would have been impossible to navigate if they had been covered in running water. 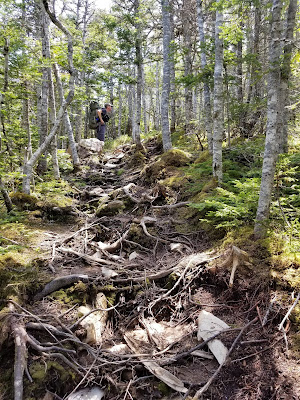 When we reached North Point and Top of the Cape after a particularly challenging climb we were rewarded with clear and panoramic views up and down the coast. However, it had taken us 4 hours to get that far, so we didn't hang around too long to enjoy the view. We continued to climb, and then passed through a relatively level section of trail with some very impressive moss. It felt a little like walking through Middle Earth. 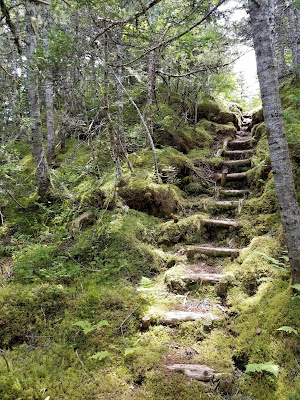 After that we made one final huge ascent and came out on Cape Broyle Head. This was an extremely windy exposed hilltop, which gave us our first good view of Ferryland and its historical lighthouse to the south. As we stood up there it felt like we were about to get swept off by the wind, and as we looked down at the ground we saw a bare patch of rock, where all the topsoil had been ripped off. With horror we realized that this was where a tree had stood not too long ago – only there was no sign of any part of the tree! It must have been ripped off the top of the hill and thrown off the cliff. Gulp. 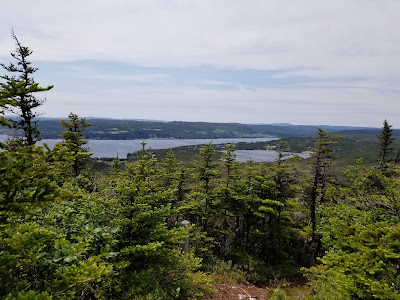 Given the rising wind and gathering clouds we hurriedly made our way off the top of Cape Broyle Head. The trail descended as fast as it had climbed – again down rocky, muddy, boulder strewn slopes. When we reached the bottom of the hill we looked back and were amazed at the steepness of what we had just crossed. 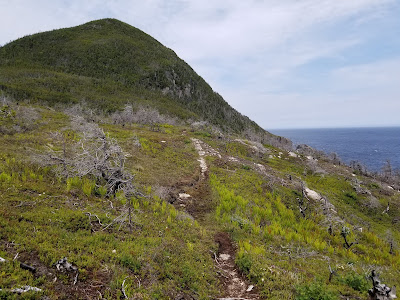 Somewhere between Cold Harbour and Castle Cove we passed through what must have been a sea side woodland until recently. Now it seemed as though a fire had scorched the land, leaving behind a barren and blackened field with white trees. 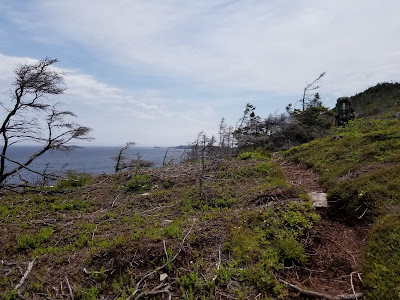 Predictably the trail again ascended after this point to Cold Harbour Hill and towards Stone Island. Although neither climb was overly challenging, by this point we were pretty tired, and each step seemed like an effort. 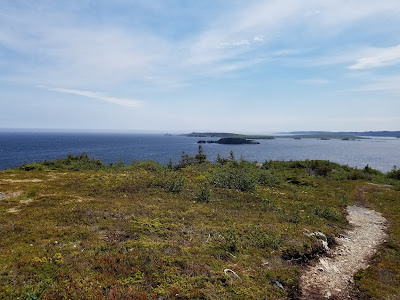 We finally reached the trail head, after crossing a small pebbled beach. By this time the wind was really starting to rise, the temperature felt like it was dropping, and the clouds were darkening. We both felt that at this point we were getting too tired to enjoy hiking further without a break, and we didn't feel like spending a night in the wet and cold. So, we phoned a few bed and breakfasts and were fortunate enough to find an empty room at the Ark of Avalon!

Since this bed and breakfast is in Ferryland, and we were still in Calvert, we began walking the community connector to the Caplin Bay Path. Thankfully this connector was nowhere near as challenging as the previous few – it was neither hilly, busy, nor as confusing. We soon arrived in the village of Calvert, where many homes appeared to be under renovation or construction. It was a beautiful spot that was renamed in honour of Sir George Calvert, an English politician, colonizer, and the first Lord Baltimore.

Once through Calvert the connector joined with highway 10, and we trekked uphill towards the Caplin Bay Path trail head. As we were struggling along an older gentleman in his pickup pulled over and told us something. To my shame I didn't understand a word he said, but when he repeated it I finally understood that he was warning us to stay off the ECT in the Ferryland and Aquaforte areas because a bear had been seen in the area. We thanked him for the warning, and still a little skeptical because we thought there were no bears on the Avalon Peninsula, we Googled the situation. Sure enough, hikers were being warned to stay off the trails due to a bear sighting!

As someone who worked in Algonquin Park and routinely saw black bears on our study sites in the woods, and whose parents have a bear that visits their backyard on a semi-regular basis, the warnings about a single black bear made me smile a little. However, given Sean's luck, I really didn't want to make news as the Ontarians who came to the Avalon Peninsula and were mauled by the first and only bear to ever be seen in that part of the province.

So, we decided to stay on highway 10, and make a stop at the Squid Jigger Lounge for a bite to eat while we decided what to do. Once again, we were greeted by extremely friendly staff, and served a huge meal of sweet potato fries, mozzarella sticks, and onion rings, along with iced tea. Just as we were finishing up, Shirley from the Ark of Avalon phoned and asked if we wanted a ride the rest of the way. Since the wind had really picked up, and it was managing to be both foggy and rainy at the same time, we gratefully accepted her kind and generous offer. 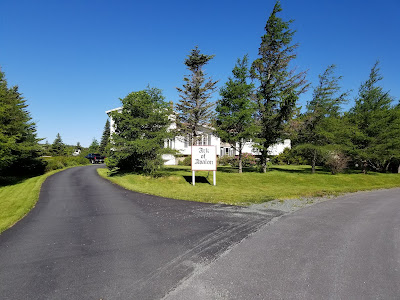 The Ark of Avalon B and B turned out to be a beautiful place, which we would highly recommend to anyone wishing to spend the night in Ferryland. The owner is really friendly and extremely helpful to hikers – she even did laundry for us! We had a beautiful clean room, adjacent to a common room for all the guests, which had a kettle for making tea. It felt like a luxurious heaven as we watched the weather outside.

Warm, clean, and dry, we spent the night figuring out what to do. We both felt that we could use a break from the trail.  The Colony of Avalon, which is located in Ferryland, looked like an interesting place to visit, and the ECT website indicated that the Sounding Hills Trail, which is next, is closed. So, we asked if we could stay a second night at the Ark of Avalon, and Shirley very kindly rearranged a couple things to make this possible. We appreciated this very much!