Day 15 - Ferryland and the Colony of Avalon

Still on trail time we woke around 6 am, but enjoyed staying in the warm and comfort of our room until around 8, when our hostess prompted us to get up for a wonderful breakfast of eggs, ham, beans, raisin toast and local preserves. It was large and delicious!

After breakfast we walked down to the ocean, and did a little exploring to find the trail head for the Sounding Hills Trail. 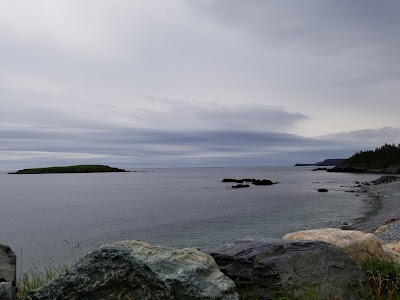 Sure enough, when we reached it we found a very formal and established sign saying the trail was closed. The apparent permanence of the sign seemed a little strange to us, since we assumed it was put there because of the bear, but later we learned it was the result of an ongoing dispute between a local landowner, the town council, and the ECTA. Although it sounds like hikers probably do have the legal right to walk this section of trail, we ultimately decided to respect the directive of the local authorities (who said the trail was closed) and the wishes of the local landowner, and to simply walk around this section rather than getting involved in a dispute we know nothing about. 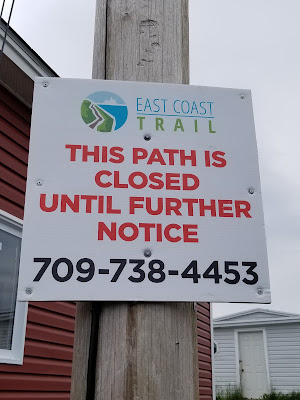 After visiting the trail head we walked down the water and dipped our hands into the Atlantic Ocean. As we plan our hike across the country, we can only dream of the time we dip our hands into the Pacific, and maybe even the Arctic Oceans as well! 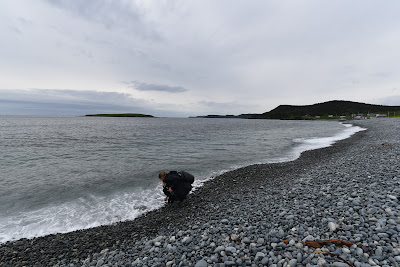 So, after exploring we walked around the bay to the Avalon Interpretive Center. This visitor center is located just off highway 10, on the Irish Loop, at the base of a spit of land that sticks out into the ocean, where one of the first attempts to colonize Newfoundland was made. Ferryland was founded by Sir George Calvert in 1621, and the interpretive center describes the history of the colony he founded and what life there was like. 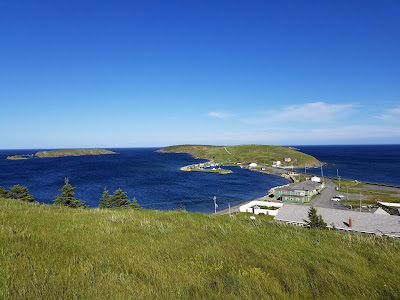 After watching a short educational video about the colony, and looking at the displays in the interpretive center, visitors can then walk out onto the peninsula and look at the archeological dig on the site, as well as the lighthouse at the end of the spit. The lighthouse is also home to Lighthouse Picnics, which provides tasty looking picnics to people visiting Ferryland, but unfortunately it was closed when we visited. 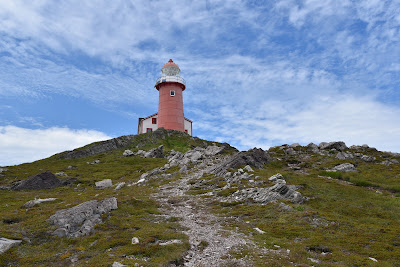 After looking at the displays and artifacts in the visitor center we started our hike out to the lighthouse. This paved road , which turns into a gravel track somewhere along the peninsula, is actually part of the Caplin Bay Path. It was a wonderful and easy walk, complete with great views, which at one point took us a through a small stand tuckamore trees. 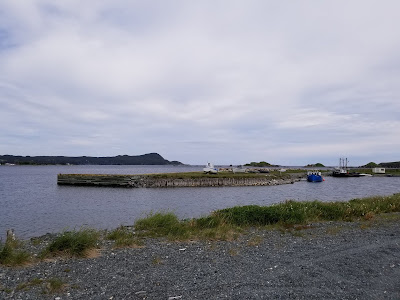 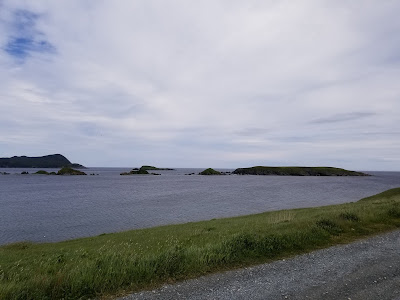 As we walked out to the lighthouse we passed by several small islands in the bay, and were surprised to see sheep grazing on them! After inquiring, we learned that shepherds often took their flocks out to such islands in the spring and left them there to graze all summer, free of predators. 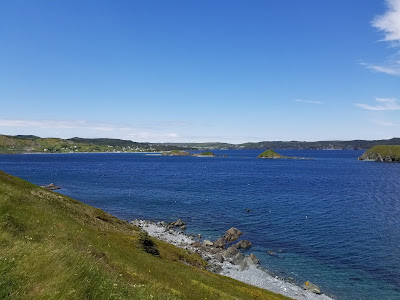 Eventually we made it out to the lighthouse, which had a unique design that was very impressive in itself. 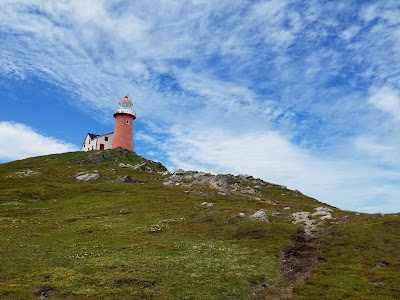 As we walked we were also very excited to see dozens of spouts in the water, representing a whole pod of Humpback Whales! This was super exciting, and an indication that the Caplin fish were plentiful in the bay. The air was alive with gulls and seabirds, including many Herring and Great Black-back gulls, and many Northern Gannets above the whales, which were breaching and leaping and slapping their tails in the water. It was wonderful to watch!  The pod stayed around, and later in the day I made a short recording of their activities (apologies for the bad video quality).

After slowly making our way back from the lighthouse, we explored the archeological site on the walk back, which was very interesting.  It was cool to be able to walk on a cobblestone road that was constructed and used by early colonists in the 1700's, and to imagine their settlement from the remaining foundations. 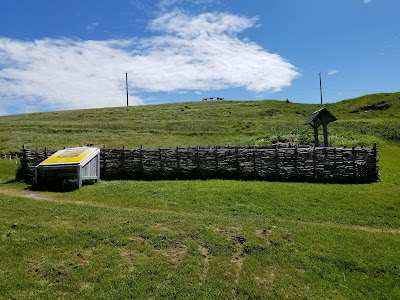 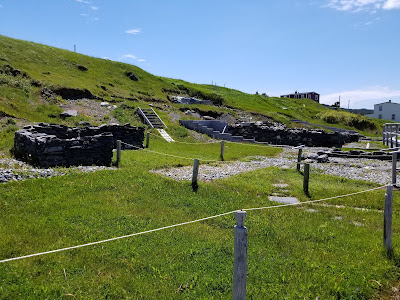 Finally, we made our way to the gift shop and the traditional kitchen. Here we were in for a real treat! The lady in this kitchen cooks and bakes a different dish each week based on a recipe from the colony, using replicas of the tools and dishes they have excavated at the site, over the wood fire. The recipes are posted online, and there is a cookoff competition with prizes.  This week's dish was Black Caps, which were baked apples topped with a mix of brandy, raisins, sultanas, nuts, and spices, and served with a dollop of brandy butter. The recipe is available here: http://www.colonialcookoff.com/news/2018/7/4/week-2-blackcaps.  We had no idea the colony would have had so many ingredients available to it! The best part was that we got to sample the results, and they were truly delicious – like Christmas on a spoon! While in the kitchen we were also treated to an explanation of all the different pottery, and had a piece of trick pottery explained. We would highly recommend stopping by the kitchen if you happen to visit the colony!

After our visit we stopped in the Tetly Tea Room, which was a lovely little restaurant adjacent to the interpretive center, which offered lunch, desert, tea, and great views of the bay. Here we indulged in a slice of wildberry cheesecake, a slice of bread pudding, a scone, and coffee. We make no excuses. 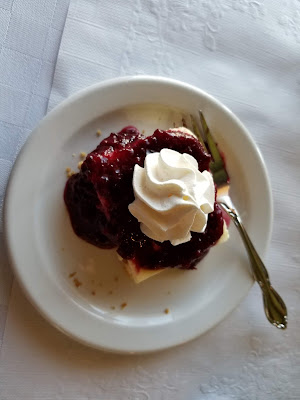 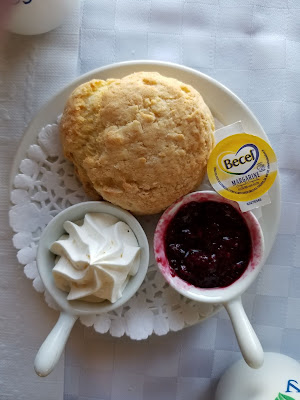 In the afternoon we walked a bit farther along the shoreline, and found the trail sign for the Caplin Bay Path. Despite being unable to walk the majority of this section from Calvert to Ferryland, we took the opportunity to explore Fox Hill and Ferryland, which together make up a substantive part of the path. Later we again followed the trail as far as the Kavanagh's Irish Loop Restaurant. On the way back we watched the sun set from on top of Fox Hill, while watching the whales that were still spouting in the harbour. 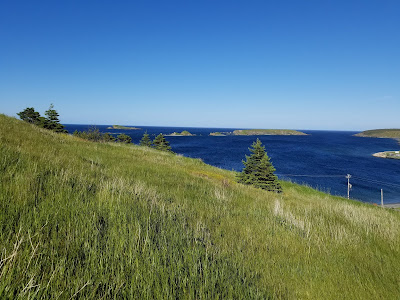 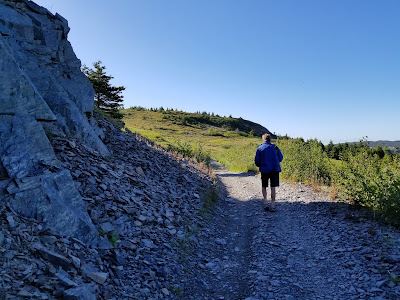 We will have to decide what to do in the morning. Hiking around the Sounding Hills Path on the highway and continuing on the Mudder Wet Path out of Aquaforte to the Gallows Cove Campsite at km 7.9 on the Spurwink trail seems like the most probable option, but it will depend on how we feel in the morning. 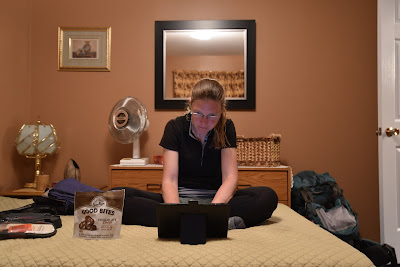