It felt good to be heading back onto the trail this morning, and we were up early to pack and get ready. After much debate, and online chats with other hikers about their recent experiences on the Sounding Hills Path, we decided to hike highway 10 to Aquaforte and continue south on the Mudder Wet Path from there. It was crummy to lose a section of trail, but we felt it was best to respect the wishes of the local authorities until the situation could be resolved. We would like to thank those online, on Twitter, on Facebook, and on email who advised us regarding this section. We would also like to thank all those volunteers and landowners out there who help support the ongoing operation of their local trails, and who allow hikers to pass through their properties – the system only works because of your generosity, so a huge thank you!

With another amazing breakfast under our belts we paid our tab, said our goodbyes, and set off on the 5 km road walk to and through Aquaforte. This turned out to be a largely uneventful trek, with motorists kindly slowing down as they passed by, and a few stopping to offer us lifts. It took us about an hour to reach the community of Aquaforte, which is another small community whose history and current economy is tied closely to the fishing industry. Today a seafood processing facility is the major employer for residents from this and surrounding communities, and we passed it on our way by. 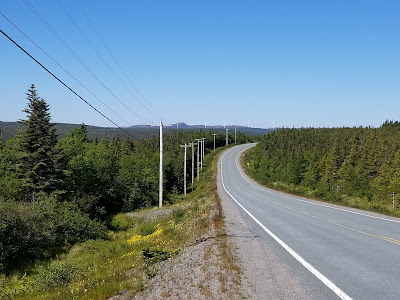 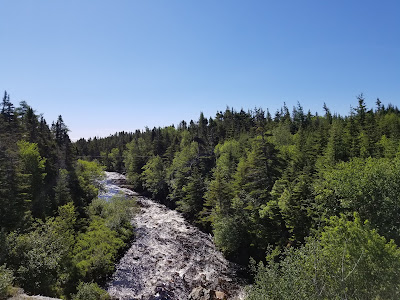 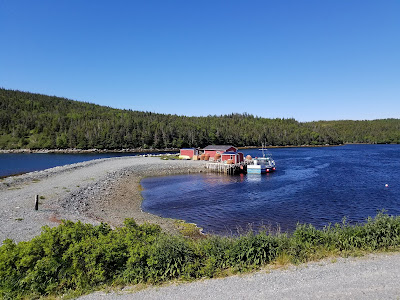 We made it through Aquaforte, and soon found the trail head for the Mudder Wet Path. The beginning of the path took us through a small wetland, where Pitcher Plants and other wildflowers were in full bloom. It was quite a beautiful wetland, complete with boardwalks to take us over the wetter portions. 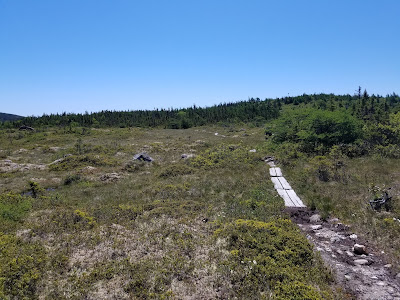 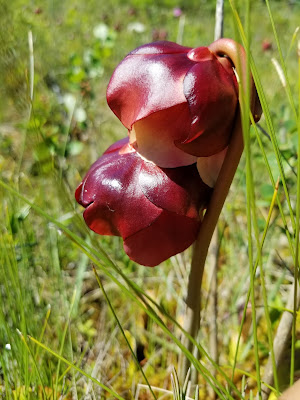 After the meadow the trail took us down to the coast, where we found that the tide was out, letting us cross the cove before climbing steeply back up onto the ridge and resuming our progress northward. 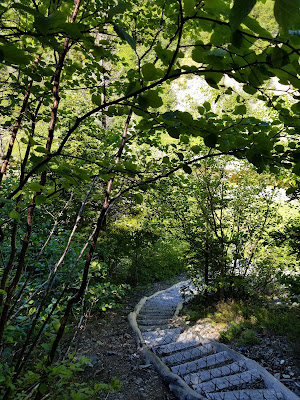 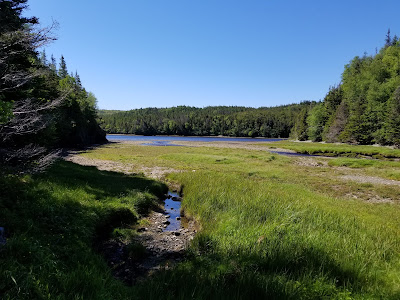 After that it was a relatively easy and pleasant hike along the coast, with a few gentle ascents and descents. 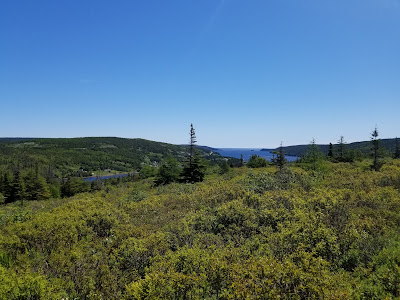 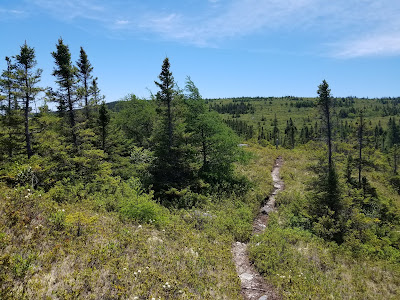 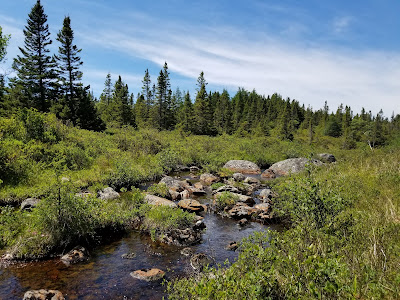 The Spurwink Island Path met the Mudder Wet Path in a patch of bush near highway 10, and just after the join we crossed a bridge over an impressive waterfall. From there the Spurwink trail delved into some long stretches of scratchy brush and waste-high shrubbery, making parts of the trail difficult to see. Mostly the beginning of the trail wasn't too difficult, although it was mostly inland and didn't provide too many views of the ocean. 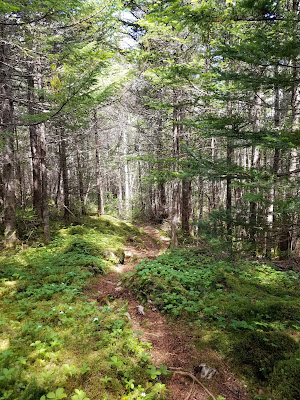 At one point we spotted a seal in a nearby cove, who continually popped up out of the water and seemed to pose for us. After that the trail became somewhat more difficult, with stretches of crumbling and rotting infrastructure, mud, and boulder scrambling becoming more frequent occurrences.


As we progressed we came to Spurwink Island, which was a beautiful and colourful rocky island jutting up out of the blue ocean below, and we once again had a clear view of the Ferryland lighthouse and the peninsula it sits on. 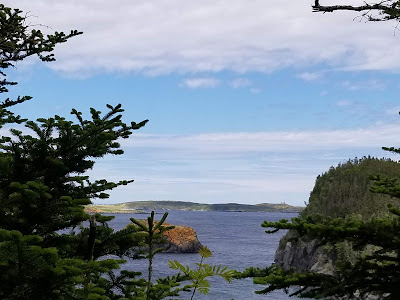 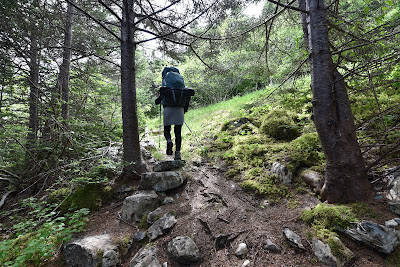 We reached the Gallows Cove Campsite around 2 pm, still feeling somewhat energetic. It was a beautiful spot to camp, but since it was still early we decided to push on a bit farther, making Chance Bay our final goal for the day. We soon reached South Head, which provided great views of Spurwink Island, the Colony of Avalon, and the Ferryland Lighthouse. 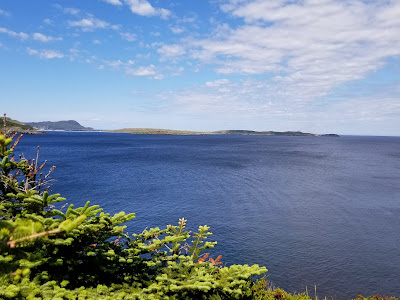 After that is seemed like a short hike to the popular Berry Head Sea Arch, which seems to be considered one of the highlights of the ECT. At this spot erosion and and wave action have worn away the coast to form a magnificent 'bridge.' 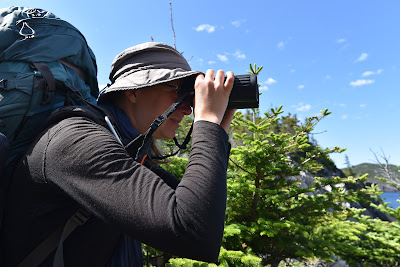 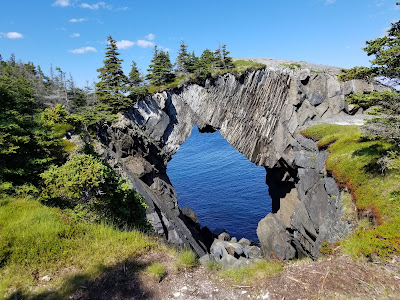 After this point the trail became increasingly muddy and difficult to navigate, and we were starting to get a bit tired. 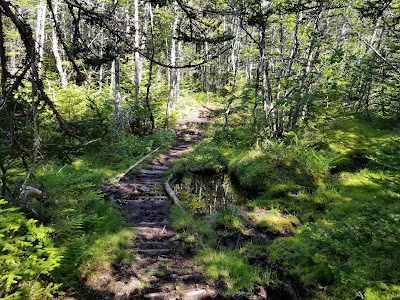 As the trail passed into a dark tunnel of conifers and began to climb we started to wonder if we had somehow managed to miss Chance Bay. Luckily, as we emerged from the tunnel we started to hear the sounds of a roaring waterfall, and we soon reached Chance River. There we found a wonderful grassy spot to pitch the tent, thanks to the advice and directions provided by Randy Best – without his guidance we probably would have passed by the spot without noticing it. 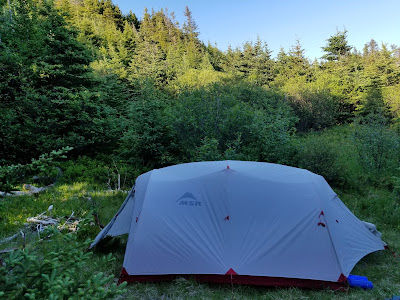 We made a dinner of pasta, wraps, and cheese and watched the sunset over the cove, which was occupied by several Herring Gulls, a Northern Gannet, and two seals. We also saw a couple of whale spouts out to sea! 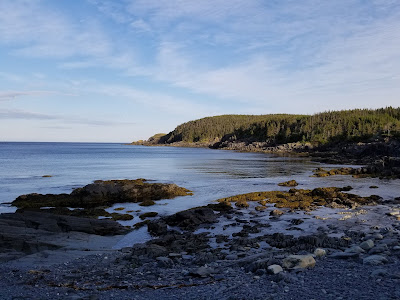 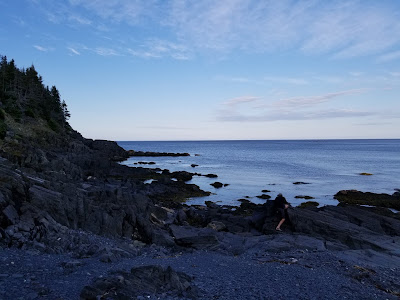 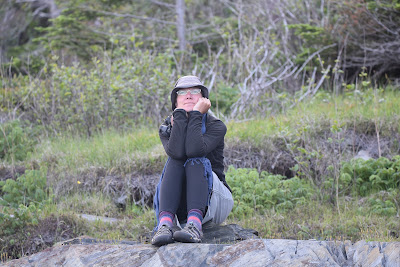 As we settled into our tent for the evening, it felt like a good day. It was a long walk, but not so challenging that we didn't enjoy it, and we have discovered that if all goes well, we could be finished the trail in only two days. 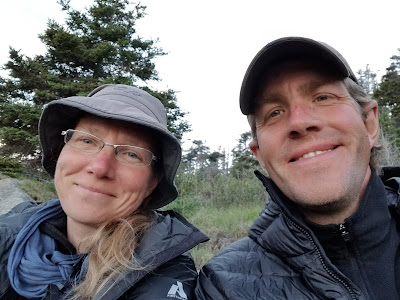