This morning we woke up, refreshed and thankful for the good weather forecast for today. Last night we decided to spend our final two days in Newfoundland hiking some of the East Coast Trails north of St. John's. Initially we planned to get a ride back up to Cape St. Francis and for two days push to see if we could complete our missing sections getting us back to St. John's.  However, after contacting a number of taxi companies the cost of getting back up to Cape. St. Francis for the day (frequently noted by each company as being over $200.00 each way) led us to revise our plans.  Instead we opted trek from Flatrock to St. John's with our remaining time.

We had breakfast and then took a taxi up to Flatrock, where we began hiking south on Father Troy's Path. As we headed away from the parking lot at the trail head everything was obscured by dense fog. Luckily the trail was well marked, and we had no trouble following it, even with the limited visibility back over the harbour. As we walked we heard the distinct sound of a whale spouting in the fog, and it seemed to be following along beside us for quite some time. 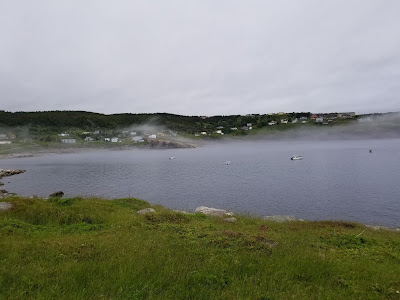 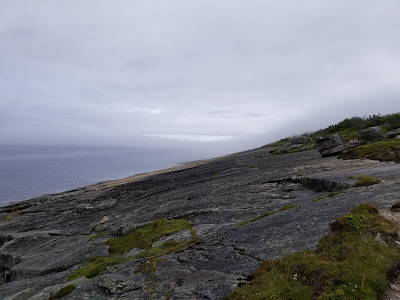 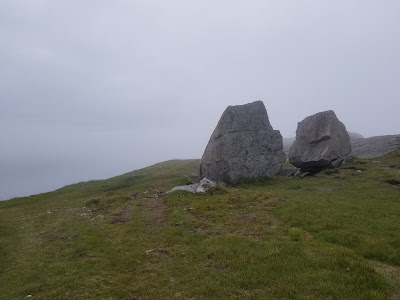 For the most part Father Troy's Path was easy walking – either on a wide flat track, or on well maintained and easy to walk footpaths. It followed along the coast, giving some beautiful views as the fog cleared and the sun came out. 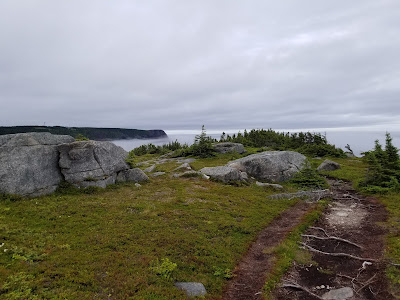 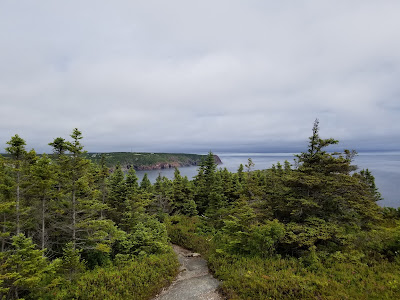 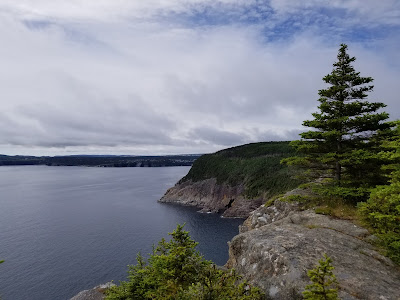 We also passed a few of the fake batteries used to fool the German troops in WWII. 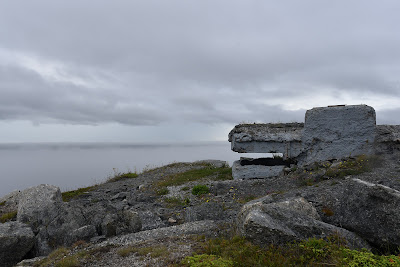 Somewhere in the vicinity of Church Cove we passed a colony of nesting Black-legged Kittiwakes, which was noisy and busy and fun to watch.


The trail became quite confusing around Chruch Cove, and in the end we stayed on the ECT (I think), without doing the Church Cove Loop. After this the trail turned into a grassy track which followed along a beautiful wooden fence, through an old orchard and grassy meadow. Here the signs of civilization began to be more noticeable – we could see houses around us, hear traffic nearby, see airplanes flying overhead, and we passed several people out walking their dogs. 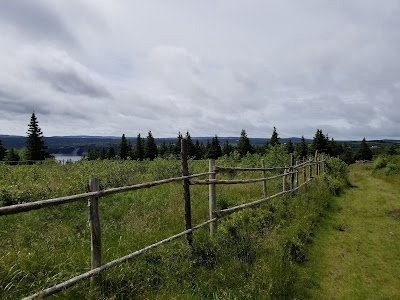 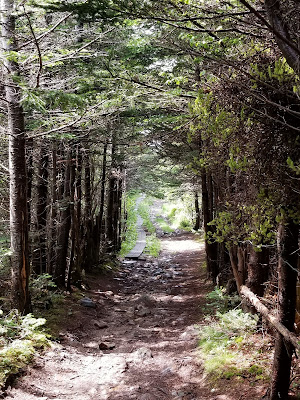 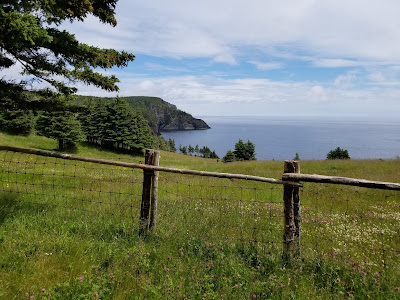 Next the trail took us over a grassy ridge and then down a staircase into a little harbour with a dock. There we signs at the top of the staircase warning hikers that the area was dangerous and prone to high tides and waves. Given the nature of the terrain on the other paths along the ECT, which did not receive any such warnings, these advisories seemed kind of strange, but I guess the closer ones gets to civilization the higher the expectations of safety are.

We nodded hello to a couple fishermen who we cleaning fish on the dock, and then took advantage of the garbage can and porta-potty in the harbour. After that it was a climb, back up a staircase, and a short walk over a grassy ridge to arrive in a subdivision and what we decided was the conclusion of the Father Troy Trail (although we didn't find a sign). 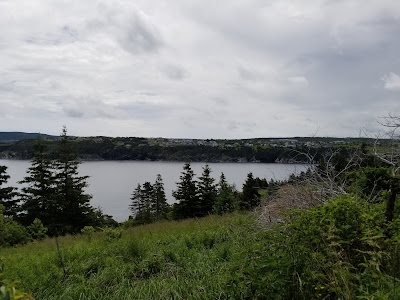 At this point our maps showed a short community connector running along the coast to the beginning of the Silver Mine Head Trail. However, when we started down it we soon found the road and the trail were closed for construction. There was actually a bulldozer at work and several workmen, so we ended up having to walk up to Torbay Rd, along that to Marine Dr, and then down Motion Drive, where we ended up taking a brief detour down Motion Lane by accident. It seemed like a long, hilly road walk that we didn't much enjoy, but if we had been thru-hiking, it is worth noting that we did pass a Mary Brown's, a convenience store, and a pharmacy in our travels. All in all, Torbay, the community we were walking through, seemed to be a well-to-do suburb of St. John's – busy, vibrant, and large.

When we finally arrived at the Silver Mine Head trail head we first headed down a grassy track behind some large houses. Then we entered a section of “unimproved” trail. Although this didn't end up being too much more difficult than most of the trails down south, it was very confusing due to a lack of signs. We headed into a wooded area, and then came to Middle River, a very active waterfall. There was a network of trails around the river, but none seemed to go anywhere. As we were wondering what to do, a kid passed us, crossed the river, and disappeared on the other side. Oh. 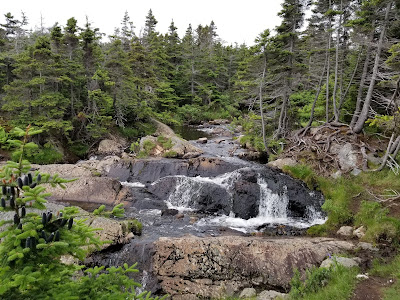 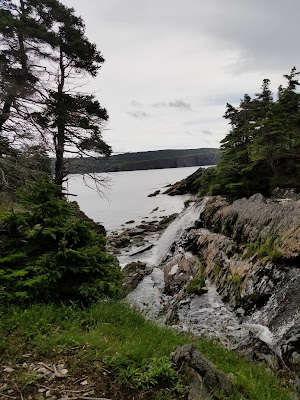 Crossing Middle River was a bit difficult. The rocks were slanted and the water was high and fast moving. However, we made it across safely, only to lose the trail again. We finally figured out that it went under a fallen tree, and emerged back on the coastline. After that point, the rest of the trail was pretty well maintained, with a nice wide pathway that offered great viewpoints and supported excellent infrastructure. We passed a number of other hikers out enjoying the day, including some kids. 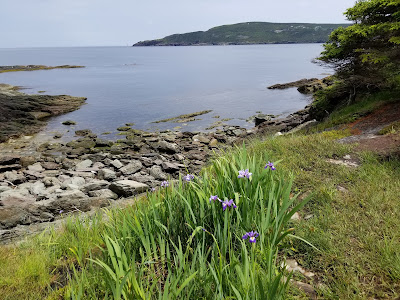 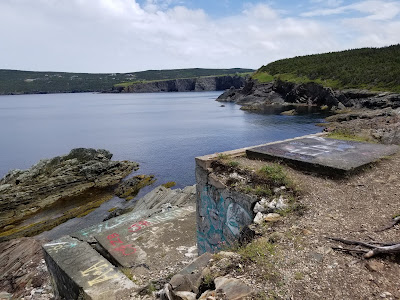 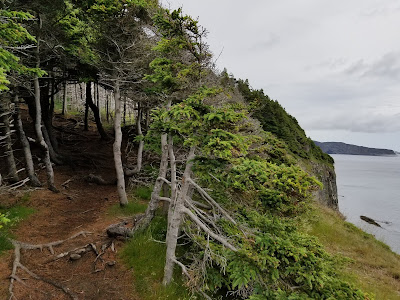 At the end of the trail we emerged onto Middle Cove Beach, which to our amazement was absolutely full of people. Upon closer inspection we noticed that many of them were sporting nets and buckets, and we soon discovered that the 'caplin were rolling.' When this happens the caplin (a sardine-like fish) gather to mate near the beaches, and then, exhausted from spawning, they are tossed by the waves onto the beaches. People then gather on the beaches to collect them, either to enjoy as a tasty treat, or to use as fertilizer on their gardens. There were so many families out on Middle Cove Beach that traffic was being directed by the police. Encountering these unexpected local events is what makes traveling fun! 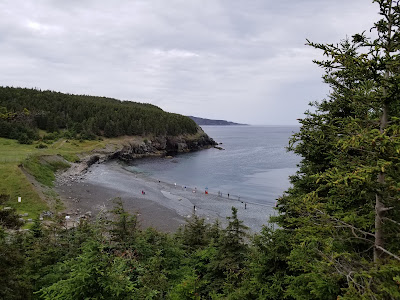 After the beach we started on a long, uphill, road walk. It was hot, the road was winding and very busy, and there were no shoulders, so it wasn't too pleasant. We did however pass a few viewpoints along Marine Dr that were full of people out enjoying the nice sunny weather. Finally we turned onto Doran Dr, which was home to a whole row of mansions, complete with large lawns, metal fences, gated driveways, and numerous warnings that the properties were under 24 hour video surveillance. Although the view out over the harbour was gorgeous, we couldn't help but think back on Reg's and Kathy's simple 3-room cabin, with its postcard view over Fermeuse harbour, which was open to whomever walked passed, and wonder if the same degree of happiness they shared would even be possible behind all those walls.

At the end of the road we came to the trail head for Cobbler Path. How to describe the Cobbler Path? I loved this trail, it had everything - great views, wonderful coastlines, forested tunnels, terrain that was easy enough to be enjoyable, great trail infrastructure with intact boardwalks – what else do you need? It did have an awful lot of wooden stairs, both going down (which were enjoyable), and going up (which were tough). Even though the stairs were steep and long, having scrambled up and down so many steep slopes on the rest of the trail, I was very happy they existed!

The trail began as a series of well maintained boardwalks over swamp and mud, and then took us through a forested area, before coming out to Torbay Point, with a beautiful view up the coast. 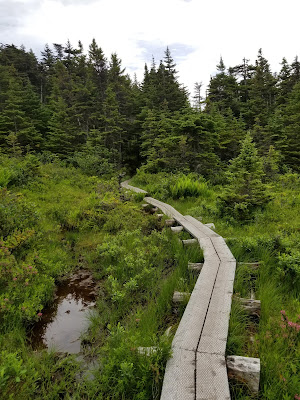 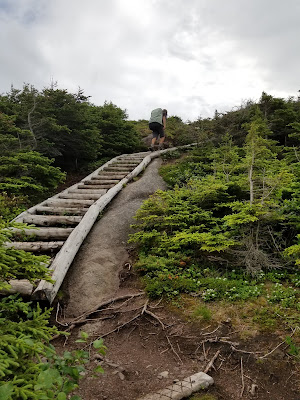 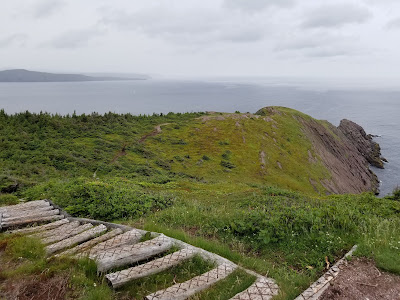 After this we had periodic views of Red Cliff, and a number of small fishing boats below. The most challenging part was a steep descent to Cobbler's Brook, which was promptly followed by an equally steep ascent up to Redcliff Head. Along the way we were rewarded with realtively easy to navigate trails, and wonderful views down the coast. 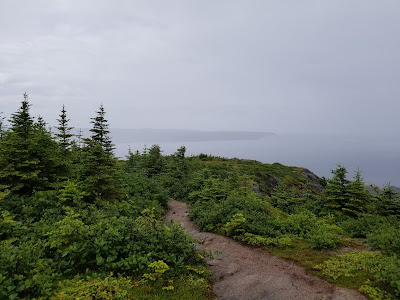 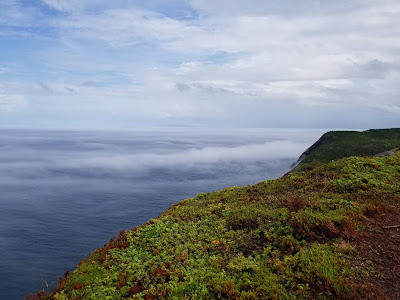 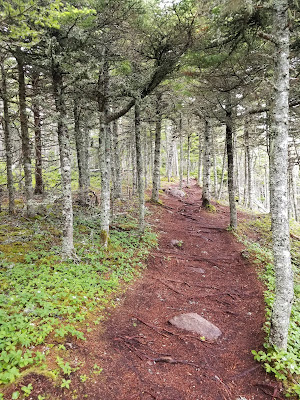 Towards the end of our hike we came to another World War II pill box, alongside several derelict buildings which had been profusely spray painted. 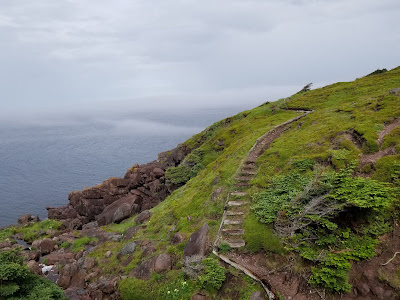 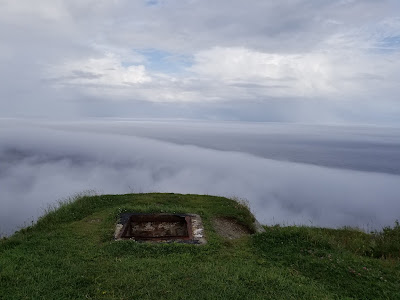 After moving along the coastline the trail again entered a stand of dense tuckamores, which were welcome, as the rain had begun again. As we approached the end of the trail we passed two young ladies who were in the midst of their thru-hike, and who looked very vigorous and full of energy. They mentioned that we should be sure to stop and watch two whales up ahead, although we never did encounter them. 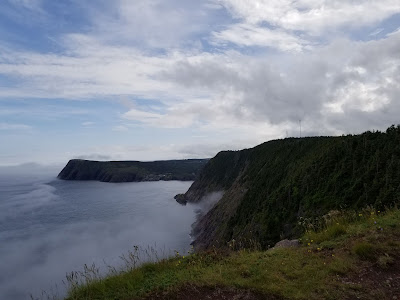 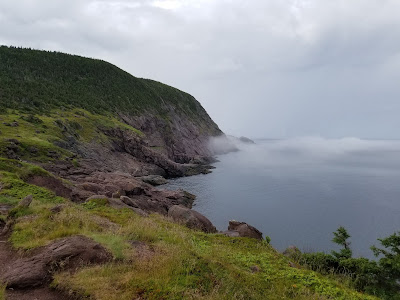 We came to the point in the trail where you have the option to proceed straight along to a viewpoint, or exit the trail onto Red Cliff Rd. To get to the road you have to pass the abandoned radar station, walk under a communications tower, and continue down the hill beyond that. At first we had difficulty locating the footpath through the bushes, but once we found it, it became easier to follow. However, it was very overgrown, and it soon became very steep – more of a washout, consisting of loose dirt and pebbles on hardpacked soil and rock than a trail. Following this unmarked route down the hill we emerged between two houses onto the road, and found the trail head for the Cobble Path. I think we would never have found our way out of there if we hadn't watched Randy Best's instructional video on the route – so thank you once again to Mr Best!

It was hard for us to assess today's hike. The terrain and infrastructure seemed much easier to navigate than some of the trails farther south, but we weren't carrying our fully loaded packs today, so maybe that made the going easier too. Either way, this section of the trail had a different feel to it – like we were in a much more developed area, which of coarse we were.