This morning we were woken at 5 am by the haunting and magical calls of two Common Loons flying over our campsite. We were soon packed up and heading back up the fire route to the Hell Hill parking lot, and then back down the 1.4 km trail to the Suspension Bridge where the trail head for Flamber Head Path is located. It was sunny, and already felt like it would be a hot day.

As we headed out of the park we noticed an abundance and high diversity of butterflies, many of which were very small. We also saw a pair of Northern Flickers - the first woodpeckers we have seen so far on the trail.  As we continued along we were also being serenaded by a chorus of frogs.  It was a very interesting morning, and it was wonderful to spend a few minutes alone at the suspension bridge in the early morning light.  We also stopped to look at the remains of La Manche Village, which is an abandoned community located beside the bridge. 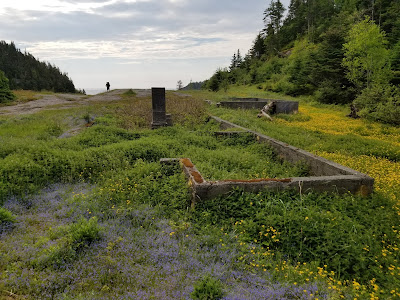 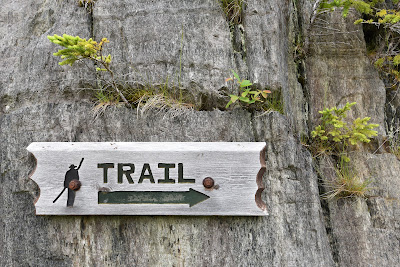 After about an hour of hiking mostly uphill, we began to realize that the beautiful weather, clear skies, and sun which we had praised hours ago while packing, were now turning into a pretty hot day.  Despite the heat the trail somehow managed to remain wet and muddy, leaving us to pick out way over rocks and around tree roots while simultaneously trying to stay dry. 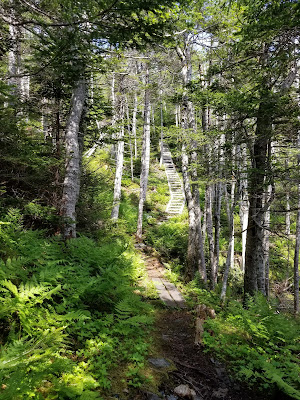 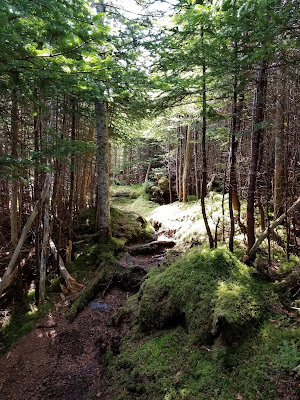 We soon crossed out of La Manche PP and began working our way towards Freshwater.  After 2 hours of hiking we arrived at Cape Neddick – which was only 2.9 km into our day's hike. This alone should indicate how tough the going was. Although the back of our map suggests the hike out to Cape Neddick and back is a great family outing for campers from the provincial park, it seemed to us more of an Olympian obstacle course of rocks, boulders, fallen trees, and mud. 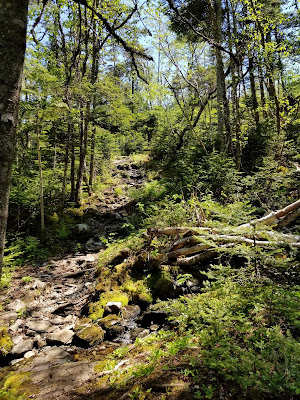 Two hours or two years later, I'm not sure which, we arrived at Gentleman's Place, a point from which we could see the impressive waterfall in Little Comfort Cove. 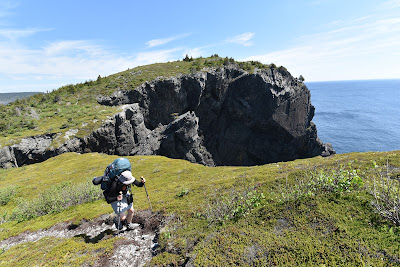 We soon found ourselves on a slate rock beach, watching the water make it's way down the falls and out into the Atlantic ocean. We took a break here, putting our feet in the stream, soaking our shirts, and purifying drinking water for the remainder of the day. 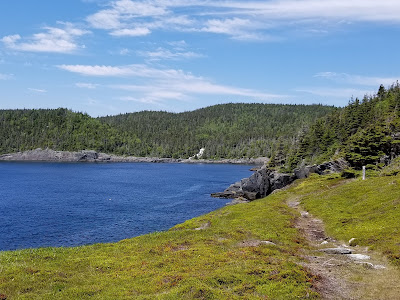 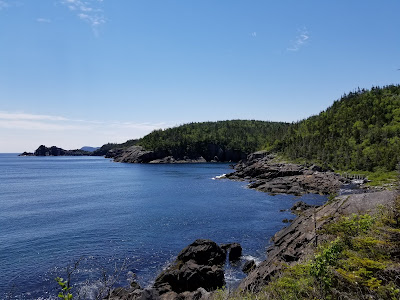 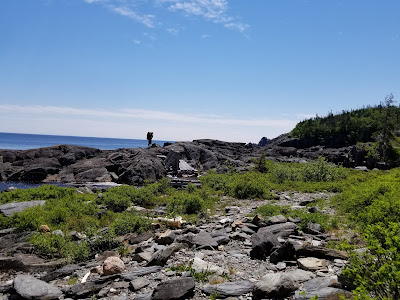 After the much need break we began our descent to Bull Gulch and later Flamber Head.  On the way we spotted two curious Pine Grosbeaks along the trail, stopped to watch two Common Loons fishing in a cove, and were startled by a tiny vole scurrying across the trail. We also saw fresh moose tracks, and quite a few moose droppings  but so far we haven't been fortunate enough to see an actual live moose.


Although the hike today seemed hard, we were pleasantly surprised to reach the Roaring Cove campsite by 2 PM. This was an official ECTA site, and it included quite a few wooden tent platforms, well spaced out, in a beautiful location. However, many of the platforms were in need of repairs, and we were somewhat dismayed to find that hikers had stuffed quite a bit of garbage beneath them. 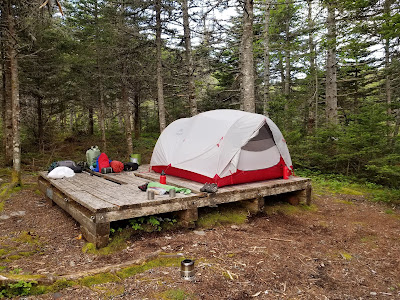 We did not cover any great distances today, but we did enjoy some beautiful views. The heat, humidity, swarms of biting blackflies, mud, and seemingly unending climbs took it out of us today. I took a refreshingly cool dip in the Roaring River, washed our clothes and hung them up to dry, prepared our evening meal, and called it a day. 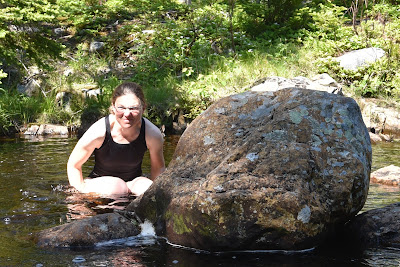 As we prepare for the evening – with temperatures still in the mid 20s - it is dumbfounding that (1) a week ago we nightly needed our winter gear, and (2) that in this heat we are carrying heavy down jackets, down sleeping bags, hats and mittens.