We awoke early and enjoyed another wonderful breakfast, this time in the company of two other couples staying at the Inn. This morning's repast was prepared by the owner and operator of the inn, whom it was nice to finally meet.

After checking out we set out on the roads of Witless Bay. This is a very long town connector between trail heads, but it was generally well marked by individuals along the way. As we headed to the Beaches Path trail head, a young man pulled up in his car and offered us a card for the Whale House, suggesting that if we wanted lodgings or a cup of coffee in Mobile that we should look them up. Although we will not be stopping in Mobile, it seems we may have missed a good opportunity in not staying at this establishment. 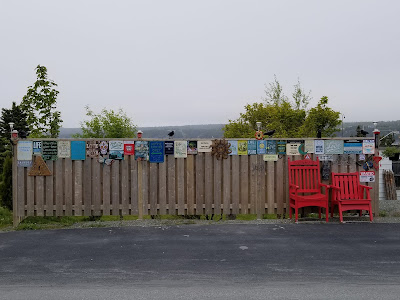 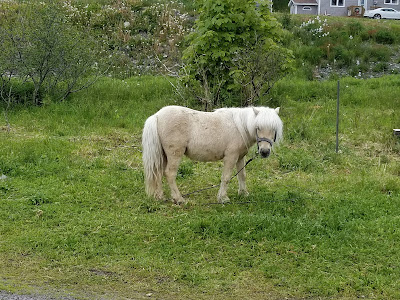 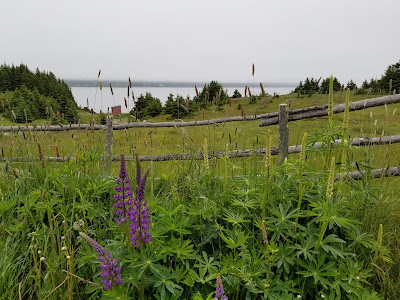 The Beaches Path was different than anything we have encountered along the ECT so far. It was a short 7 km trail, which took us along the coast near water level for a change. We walked across boulder beaches, through meadows along the shore, and along treed footpaths next to the water. In several sections there were boardwalks over muddy or wet areas, although a few of these were in need of some repairs. Many of the broken sections had been marked with flagging tape, so maybe some TLC will be provided in the near future. Generally, this trail was well developed and an easy and enjoyable walk. 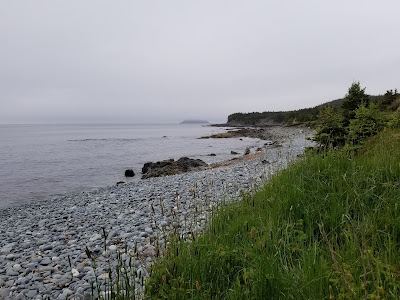 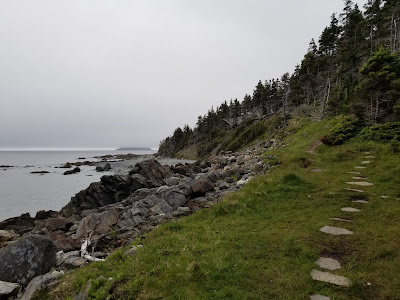 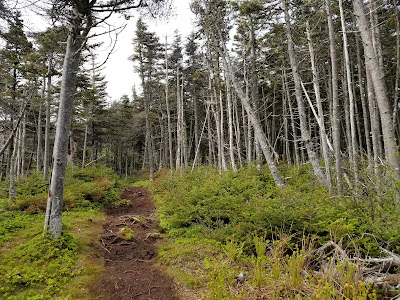 As we progressed along the path, we could see Gull Island and the swarms of birds flying above it. This was very entertaining, as were the many Atlantic Puffins we could see floating off shore. It was amazing to see how differently these birds land on the ocean, compared to the graceful movements of ducks and geese landing on ponds. Maybe it is the rough waves, but it often looks like puffins do a kind of face plant in the water when they land. They are equally endearing when they come up from a dive, seeming to emerge backwards, with wings and feet flailing. So cute! 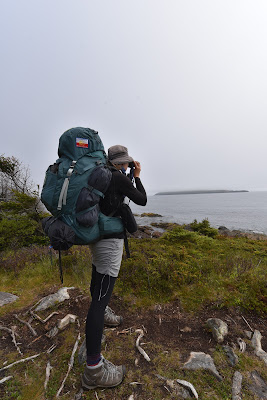 Towards the end of the Beaches Path, as we were crossing an area of dense firs and spruce, we were surprised when a beautiful Ruffed Grouse jumped out onto the trail, warbled at us, and then took off. We sat for several moments and it soon returned. It must have had either a nest or babies on the trail side, and not wanting to disturb it too much we soon walked on. Not however before watching a pair of Northern Waterthrush carrying food to their nestlings in the same area.

As the day progressed it became warmer, causing us to remove our sweaters and leggings. As we emerged from the trail into the village of Mobile we were met with the somewhat unwelcoming sight of dozens of “Private Property”, “Stay on Trail”, “Hikers respect Property Rights”, etc. signs around the trail head. Once past the residential section of this village we arrived on a pleasant boulder beach where we enjoyed some water and a snack and watched a pair of Greater Yellowlegs foraging along the shore. 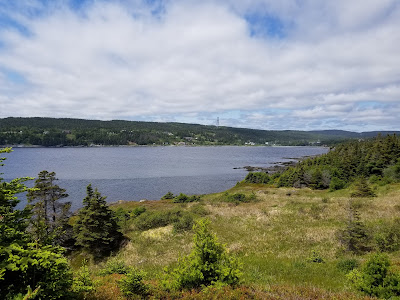 After a short break we made our way uphill along Cove Road to the Tinkers Point Path tail head. This trail turned out to be similar to the Beaches Path, and we were again treated to views of puffins and razorbills off shore. This path was also not as challenging as the ones we have traversed so far, and it was quite enjoyable to be able to look around more without immediately tripping over a rock or a root. 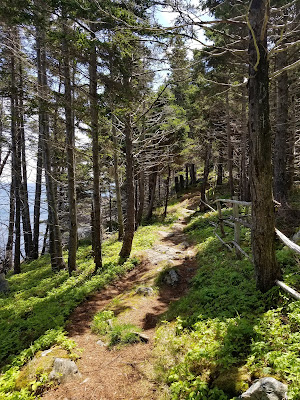 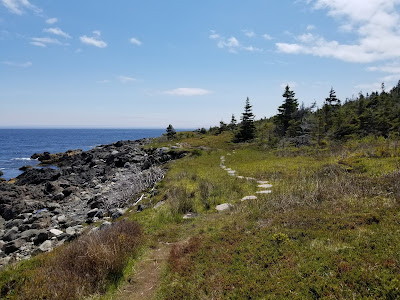 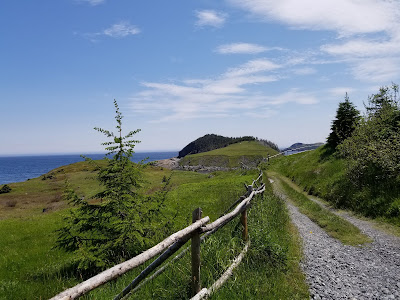 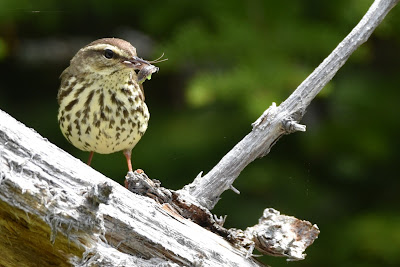 The Tinkers Point path eventually brought us to Tors Cove, past a place called “The Cribbies,” which is a very beautiful little settlement. Everything about this small area was picturesque. Soon afterward the trail rounded the hillside and entered Tors Cove above a large abandoned factory, next to a beautiful but derelict church. With a single sign at the trail head indicating which road to take, we began our walk through Tors … and promptly got lost. Upon inspection we learned that the ECT map suggests “once you leave the Tinkers Path walk 600 m to the next trailhead.” This was not the most useful advice to one unfamiliar with the area. Guesswork lead us to the harbour, up to the power house, and onto a well used gravel road. During our time on this road we had to remain vigilant as both motor bikes and ATVs used this route at high speed and with little inclination to slow down or stop for hikers.

Having survived the gravel track, we soon found ourselves on a paved road that took us through the villages of Burnt Cove, St. Michaels, and Bauline East. 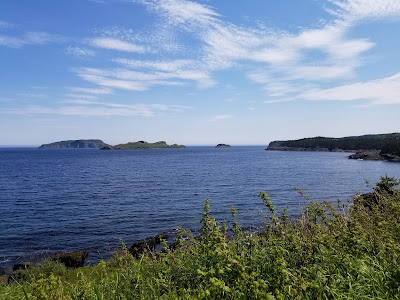 Given the heat of the day, we were grateful to find the Ocean View Bakery in Burnt Cove. The delicious smells coming from within prompted us to buy 6 oatmeal cookies, 6 chocolate chip cookies, and two cold drinks. These we enjoyed on the back deck of the bakery, which afforded a fantastic view of Fox Island, Ship Island and Pee Pee Island. Twenty minutes later, relaxed, re-energized, and having eaten too many cookies, we went back inside and purchased cake for our evening desert before continuing on. 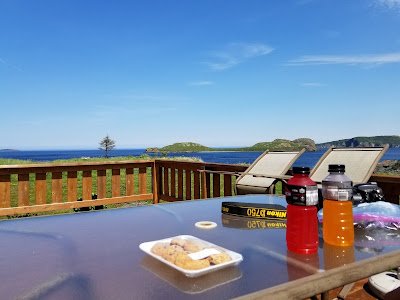 We walked through St. Michaels, past Seals Cove, and alongside Bauline Pond, which reminded us of Northern Ontario, to Bauline East. Uncertain how to proceed, we rested at the Bauline pier, had some water, checked our maps, and fought off the blackflies. We were soon pointed in the correct direction (straight up hill) by two lovely ladies who were walking their dogs.

As we trekked along the pathway it was clear that parts of it were an access road and that lots were being prepared for housing and development – I can only hope that the natural integrity of the region is also being preserved as the area builds up. As we entered the park, the changes in the trail were evident. Suddenly we found ourselves walking along a well developed, flattened, poured gravel path. A great deal of this section of pathway is also on exposed rock face – much like the shield in Northern Ontario. Soon we arrived at Doctor's Cove – the first of our potential stopping points for the day. However, it was only 3 pm, there were countless groups of teenagers on the beach, making it a rather busy place, and so we decided to continue on. 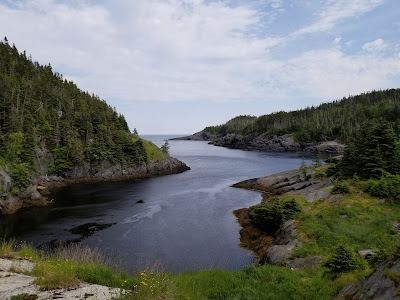 Shortly after this point the path led to a boardwalk which clung to the side of the rock face. After turning the corner the noted La Manche Suspension bridge came into view! Before reaching the bridge we climbed a long wood staircase up a hill, just to turn back down again, but it did give wonderful views of the bridge. The 45 foot long suspension bridge spans a chasm over a beautiful waterfall. On the other side of the bridge we found the trail head for the La Manche Village Path, marking the completion of this trail and the point where we will return to tomorrow. 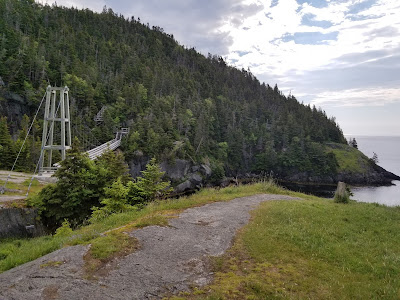 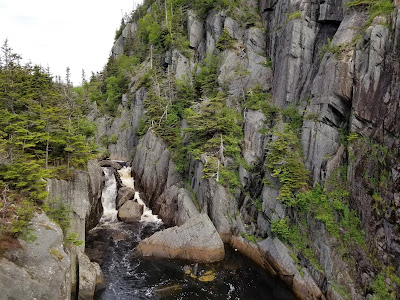 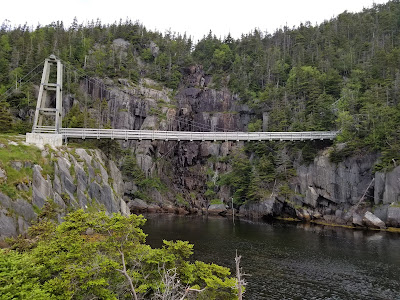 Still feeling energetic and in good spirits we decided to walk into the Provincial Park to get a campsite there, and hopefully enjoy a shower. With this in mind we headed up a path leading away from the bridge, which was frequented by many other hikers. We soon found a pond full of green frogs – the first sign of frogs we have seen on the trail so far! We thought we were walking toward the campsite, but instead we ended up climbing Hell Hill. When the trail finally ended in a parking lot we called the park office to ask where we were and how to reach the campsite. A very helpful park attendant ably directed us down the fire route straight into the campsite. It was through his helpfulness that we were able to get to the office, check in, and get set up for the night in a very nice campsite close to the entrance, so we didn't have much farther to hike. 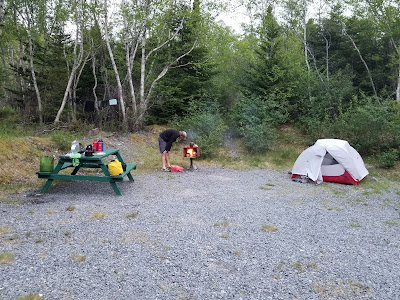 That evening we were able to have a campfire, enjoy a shower in the wonderfully clean comfort station, and do some laundry. We also got to chat with another gentleman who was a tour operator going out to the Ecological Reserve, and a photographer. For dinner we cooked up a meal of rice, vegetables, wraps, and cheese, which we ate beside our campfire. It was a nice ending to a wonderful day.