Today was mostly spent in transit.  We spent a slow morning, packing up, having breakfast, and then making the half hour walk to Chapters to get a book for Sean to read in the shuttle.

At 12:30 we were picked up by Marsh's Taxi.  Marsh's was one of several companies to choose from who run a daily shuttle up to Bonavista.  Marsh's offers a shared ride for passengers in a van, which is also used to run a courier service up and down the route.  So, we stopped to pick up several other passengers on our way out of the city, and then made quite a few stops along the way to deliver and/or drop-off packages.  It may not be the fastest mode of transport, but they offer a prompt, professional, and courteous service, and it is far cheaper than hiring a private taxi would be.  These passenger/courier services seem to be available for multiple routes throughout Newfoundland, but they can be a little difficult to find. 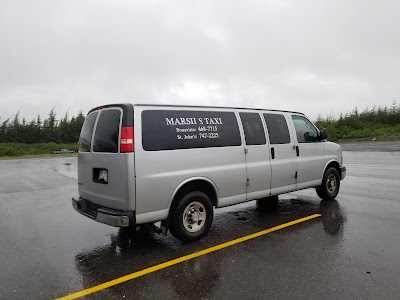 As we headed out of St. John's the rain was pelting down, and the wind seemed to be picking up.  This made us very glad that we were not attempting to hike along the coast today!  The drive up to Bonavista is a little over 4 hours, and we stopped half way at a service station for a much needed break.  A little farther north the wind and rain got really bad, and the road was closed due to a fatal accident, so we had to backtrack around it, which meant we arrived in Bonavista around 5:30 pm.

We checked into Abbott's Bed and Breakfast, where we will be staying for the next two nights.  We were given an efficiency suite, which meant we had a little apartment all to ourselves.  This was all that was available, and it didn't cost much more than a room, but it felt like luxury - especially since the place was gorgeous, and quite literally spotlessly clean! 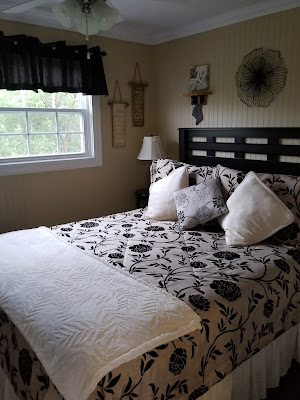 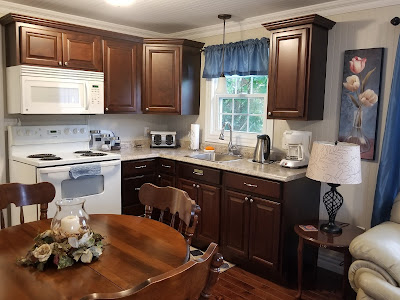 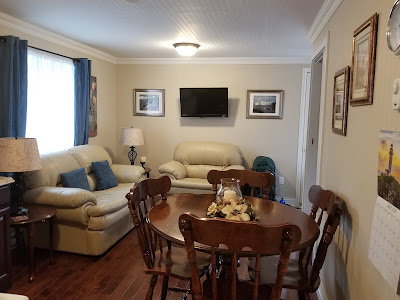 On the advice of the very friendly and helpful innkeeper we headed downtown for dinner.  It was still raining at a rather torrential rate, but we donned our rain gear and headed out for the half hour walk.  The first pub we came to was Shannon's, and they seemed to be offering live music, so we stepped inside.  This turned out to be a good choice!  I enjoyed a bowl of Guiness Onion Soup, and Sean had a Shephard's Pie, which we followed up with homemade pie.  We spent a couple hours enjoying the live Celtic music, the food, and the warmth and dryness. 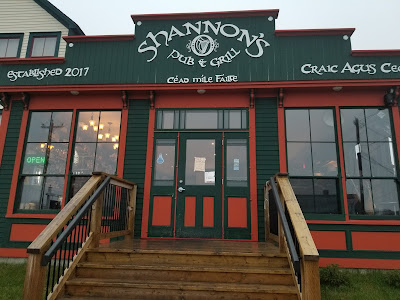 By the time we headed out again there was a break in the rain, and we took the opportunity to walk around town.  It was shrouded in mist, which made it look kind of magical.  There is a lot of history here, and it seems to be a popular spot for tourists.  Everything looks freshly painted and very well kept up.  We walked past the largest wooden church east of Montreal, and down to a boardwalk around a small lake.  Then we walked back along the main street, and stopped for a moment to look out over the beach to the lighthouse.  It was a very magical evening. 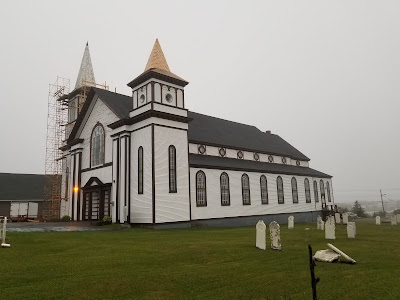 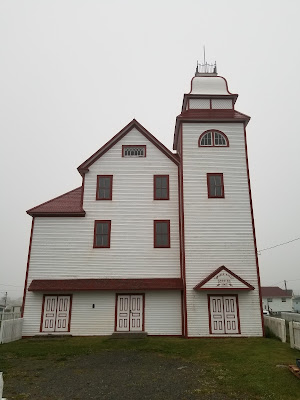 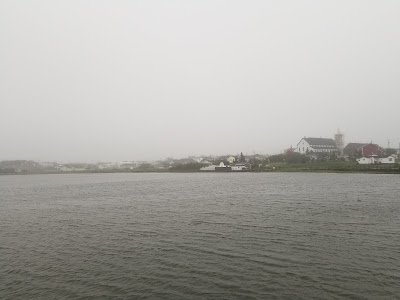 As it got dark and began to rain again we headed back to the bed and breakfast.  Tomorrow we will explore Bonavista a bit more, and head over to Elliston to see the puffins!  It promises to be a very enjoyable day!