Bonavista has a lot to offer, including the opportunity to visit the Cape Bonavista Lighthouse, Dungeon Provincial Park, the Ye Matthew Legacy, the Ryan Premises National Historic Site, and the Mockbeggar Plantation Provincial Historic Site. The Ye Matthew Legacy features a full-size replica of the Matthew, the ship in which John Cabot sailed from England to North America in 1497. It is located here, because it is believed that Bonavista is the point at which John Cabot first made landfall in North America.  The Ryan Premises is a collection of 19th and 20th century heritage buildings which were once the headquarters of the fish merchant James Ryan, and now showcase the history of the town.  The Mockbeggar Plantation was the former residence of politician and Confederation advocate F. Gordon Bradley, and today exhibits there tell the story of life in Newfoundland in the 1930s and 1940s, when the issue of whether to join Canada or not was being debated.  Although we would have liked to visit all these locations, doing so on foot in a single day was sadly not a possibility.

We woke early and shared a wonderful breakfast of blueberry pancakes, coffee, and orange juice with a couple from Calgary, Alberta, another couple from Connecticut, and two sisters from St. Pierre and Miquelon.  Most of the discussion centered around the 100 kph + winds that had shaken the house last night and driven the rain in through the closed windows.  Thankfully the worst of the storm had passed by, and this morning was clear and sunny.

On the advice of the innkeeper, we headed down to the Cape Shore Trail, which is a 5 km trail that follows the coast from Bonavista to the Cape Bonavista Lighthouse.  It was a beautiful trail, and this morning the large waves from last night's storm fun to watch. 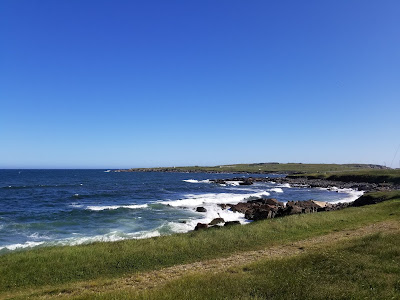 Part way along the trail passed by a replica of a fish flake - a large wooden platform on which cod and other fish species had traditionally been dried. 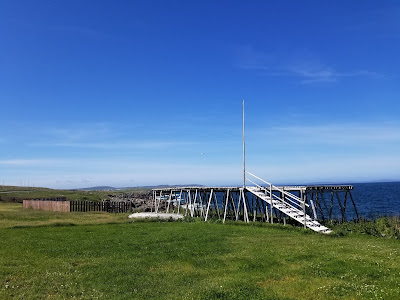 It was a very beautiful trail, but as we walked we were struck by the complete lack of any trees! 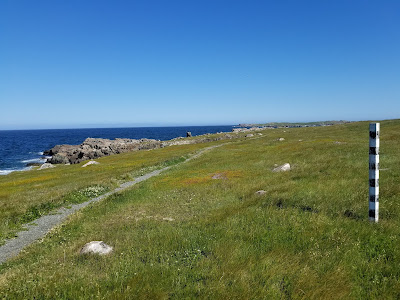 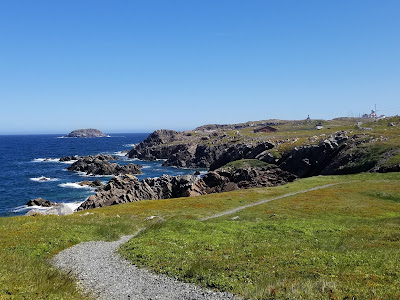 As we approached the lighthouse we came to a statue commemorating the arrival of John Cabot (Giovanni Caboto) in 1497.  In true Canadian fashion, the memorial acknowledged that there is some uncertainty that he actually made landfall in Bonavista, but that it is likely. 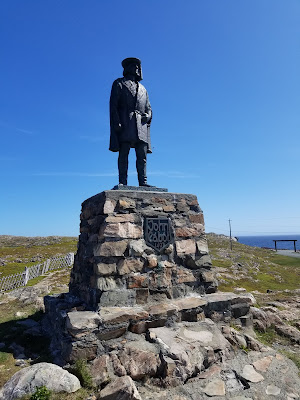 We stopped to watch a red squirrel flitting in and out among the rocks, to admire an inland lake along the shore, and to watch gulls circling above a rocky island beyond it. 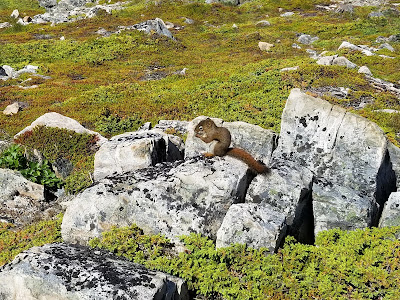 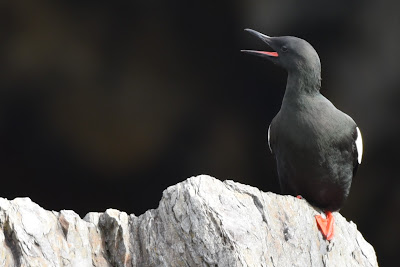 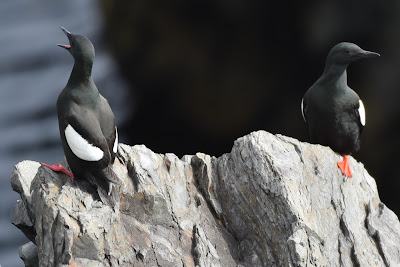 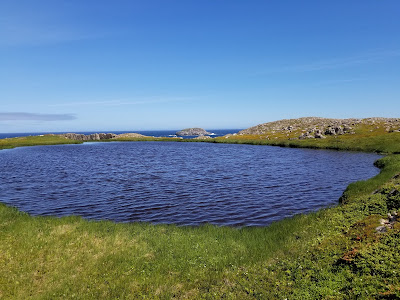 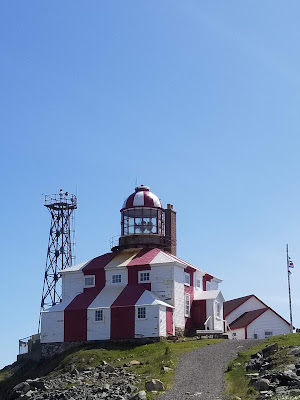 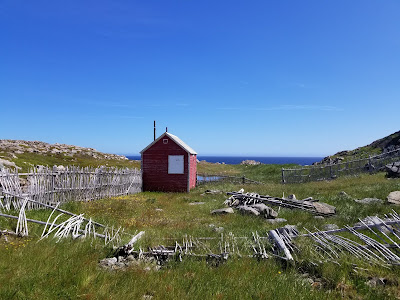 At the back of the lighthouse, just a few meters off shore, was a rocky outcropping where a small group of Atlantic Puffins were nesting!  This was an unexpected treat, and we spent quite some time watching and photographing the endearing birds. 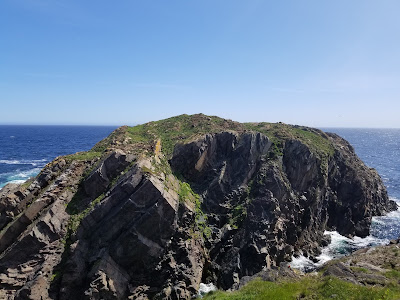 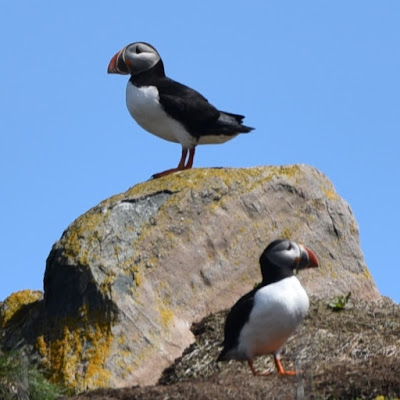 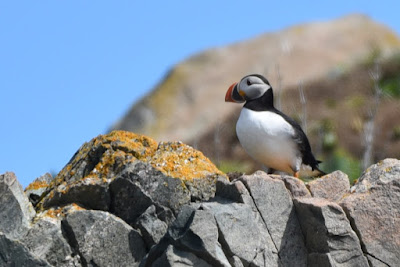 As we sat there, a number of whales including a humpback whale surfaced just off the shore.  Another unexpected treat! 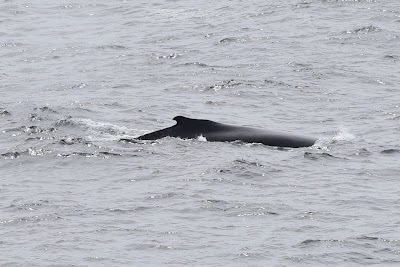 After visiting the lighthouse we headed back down the Cape Shore Trail, stopping at the Little Dairy King restaurant, which is located on the trail, for a bite to eat for lunch.  It was another friendly, cozy, place with good food and great service, and we thoroughly enjoyed it.

Afterwards we headed farther north on the trail, until we came to the access road for Dungeon Provincial Park.  It was a 2 km trek down a gravel road into the park, but in the end it was well worth it. The main attraction of this day use park is a collapsed sea cave with a natural archway carved out by wave action. 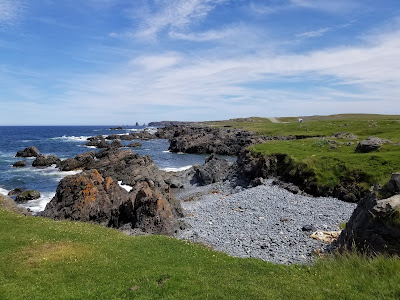 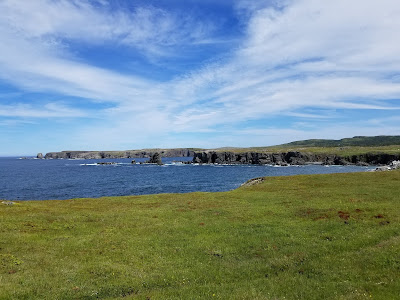 As we walked we assumed that the scenic caves would be somewhere off in the distance, right along the coastline.  However, as we soon came to a tour bus, apparently parked in the middle of the field, whose occupants were milling around, clearly looking at something. 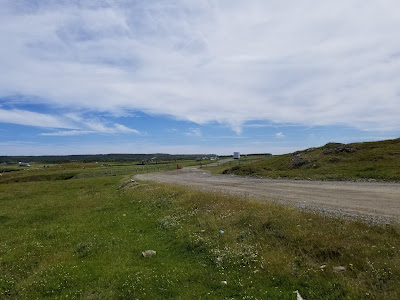 As we approached, we realized that the feature was somewhat inland, at the back of a cove.  It was quite unexpected, and very beautiful. 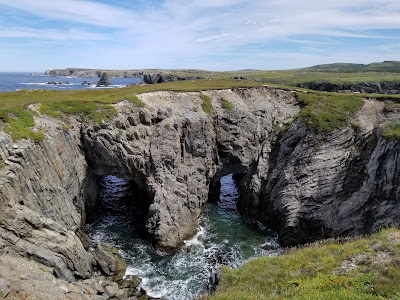 After visiting Dungeon Provincial Park we saw there were two options for returning to Bonavista, so we decided to take the one we hadn't already seen.  Once we got somewhat lost it turned out to be the scenic route, and definitely gave ourselves a tour of residential Bonavista.  The up side was that we stopped for some very tasty watermelon sorbet on the way back through downtown.

Once we had returned to the bed and breakfast it was evening, and we decided to take a taxi out to the nearby community of Elliston.  Elliston is known as the Root Cellar Capital of the World, and it apparently has many sites of historical significance to share with visitors.  However, the reason for our visit was the free Puffin Viewing Site.  At this location there is a colony of breeding Atlantic Puffins that routinely come on shore and walk right up to visitors.  The colony is apparently more active on land in the early morning and evening. 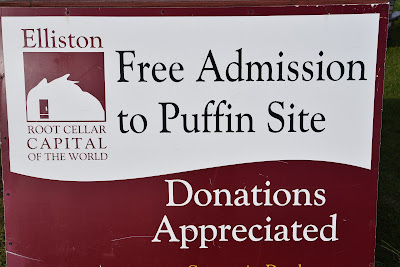 When we arrived at the Puffin Viewing Site it was a short walk out to the colony.  There we spent a happy hour enjoying and photographing the antics of the puffins. It was quite an amazing experience! 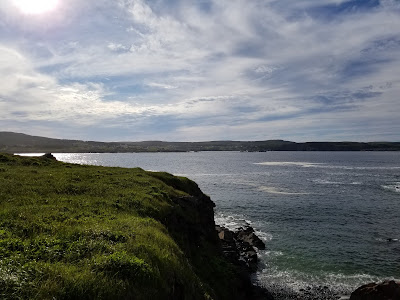 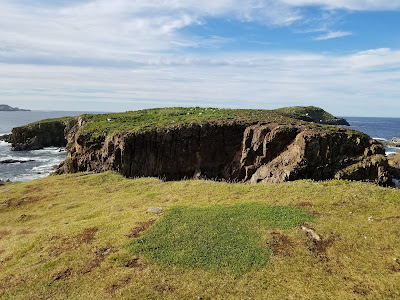 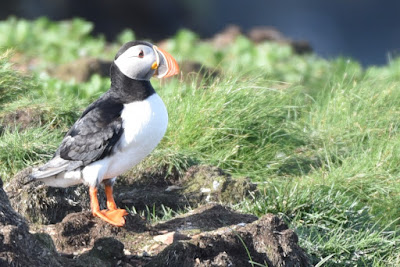 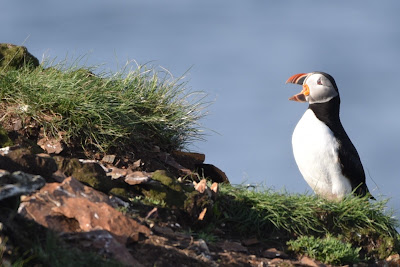 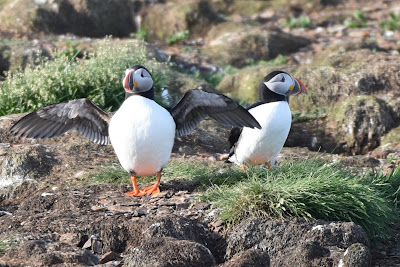 At the same site there are a few of the famed root cellars, which are rooms dug into the ground which still seem to be in use for storing vegetables. 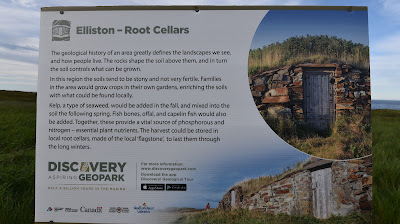 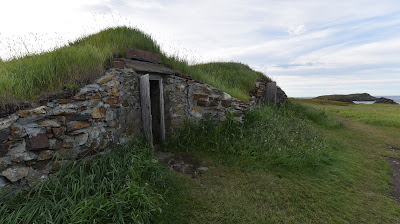 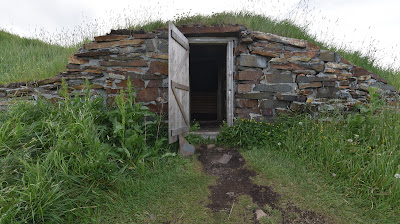 As it began to get dark we took a taxi back to Bonavista.  We wandered down to the harbour to enjoy the sunset, and then returned to the pub for a filling dinner of soup and sandwiches while listening to live music. We could easily spent several hours in the cozy, warm pub enjoying the music, but we have an early morning tomorrow, so we headed back to B & B around 10 pm. 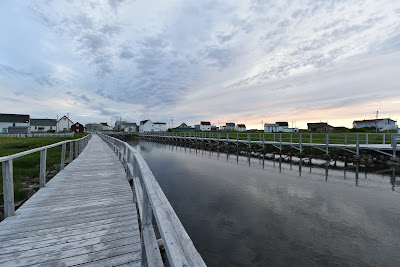 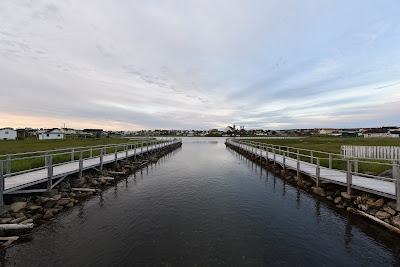 It was a wonderful day in a beautiful place, and we both wish we had more time to spend here.  There was no way we could visit all the attractions in a single day on foot, and I'm not sure it would have been possible to do so even if we'd had a car.  I would highly recommend a visit to Bonavista if you are a fan of nature, history, or scenery, but make sure to spend a few days!