We awoke early this morning to the soft patter of rain on our tent, which didn't provide much incentive to leave our sleeping bags. Instead we enjoyed the shifting light of the morning through our screen door until the shower had passed, and then begrudgingly got up around 7 am to make breakfast. Just as we were finished packing, we were intrigued to hear a loud huffing sound in the cove. 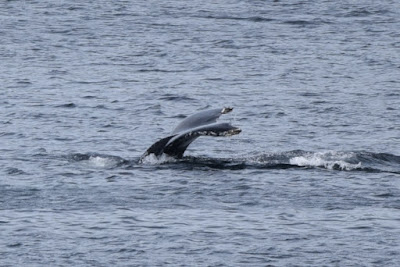 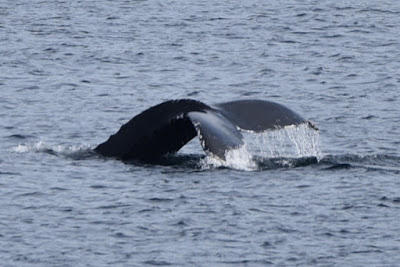 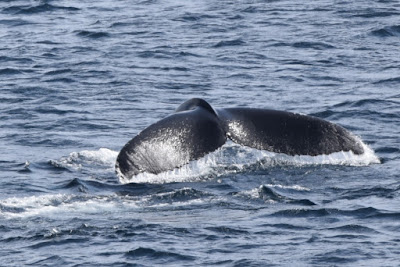 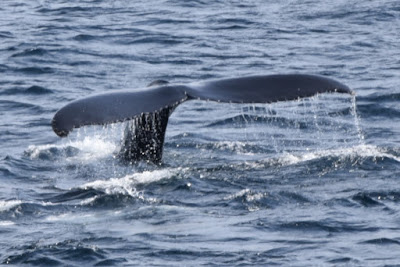 We quickly ran over to investigate, and discovered that a humpback whale was fishing right there in the cove!! We watched for quite a while as it circled around, breaching, spouting, and slapping its tail a couple times. There were more whales just outside the cove as well, visible by their spouts. It was very difficult to leave this exciting cove behind and continue on down the trail. 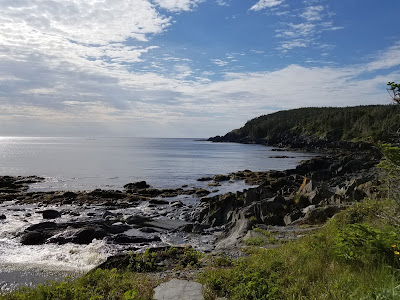 This morning the Spurwink Path took us over soft hills, along beautiful coastlines, and across exposed heath meadows.  Many of the more open areas provided clear, panoramic views back down the coast to Ferryland and the lighthouse at the Colony of Avalon. 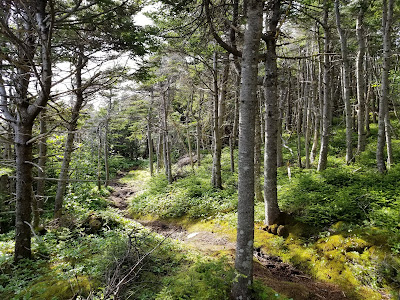 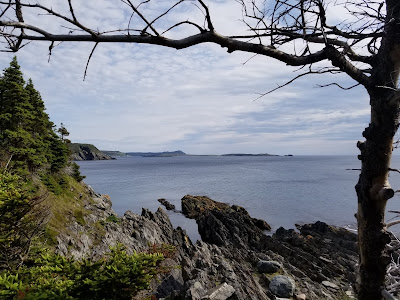 From atop Bald Head we saw two whales very close to shore, far below us, and we again stopped to watch. Our progress today was slow with all the distractions, but we thoroughly enjoyed it. 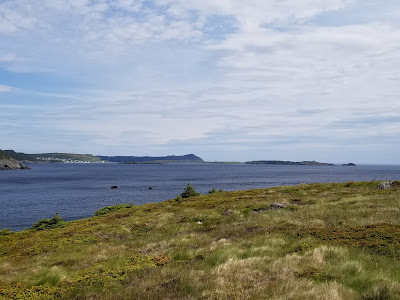 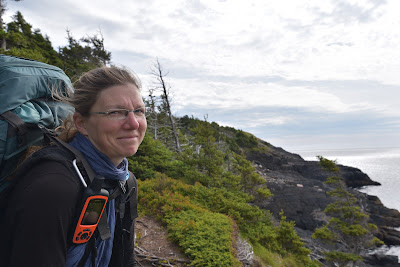 Eventually we came to a well maintained gravel cart track, which soon brought us to the tiny and charming town of Port Kirwan. Just as we entered Port Kirwan we passed a nice looking campground, which would have made a nice spot to stop for the night, but we decided to push on. After we climbed and descended a rather large hill we started down the paved connector road through Fermeuse. 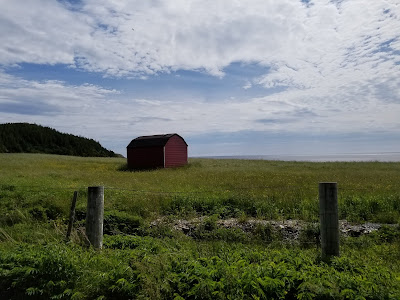 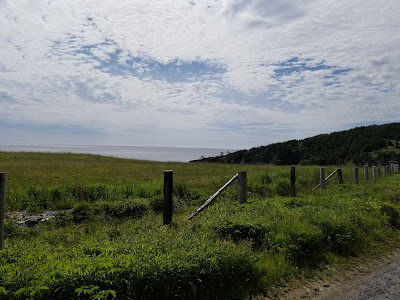 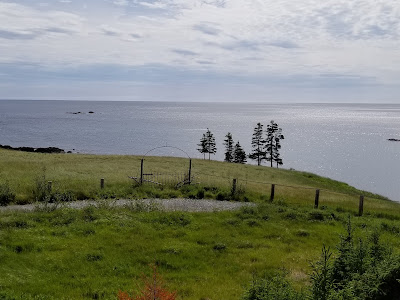 Here our experiences were somewhat mixed. The trek into Fermeuse involved several steep climbs, which were rather hard on the pavement. However, we also passed a beautiful church, rescued a baby starling from the roadway, marveled at a row of wind turbines on a nearby ridge, and easily found highway 10. Also, we were passed by many friendly motorists who offered us lifts. Although we didn't accept any of their generous offers, we were heartened by this overwhelming show of kindness from random strangers. 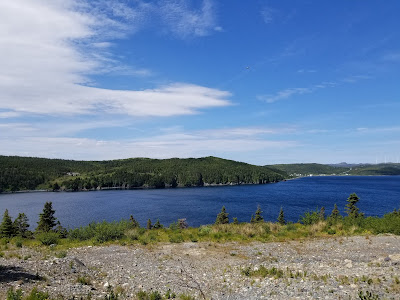 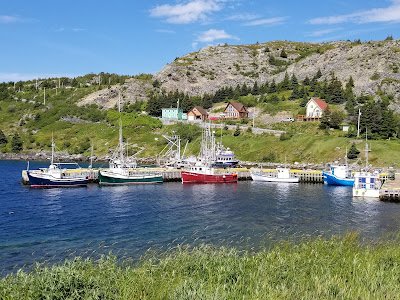 Along the connector we came to another nice resting spot with a picnic table, information plaque, and great view of the area, and we stopped to take a short break. 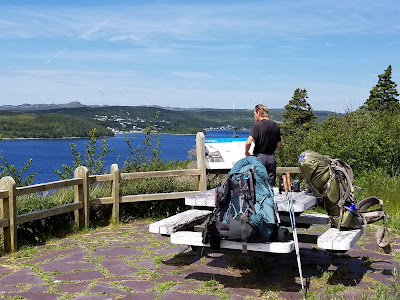 When we reached Fermeuse, nearly an hour after leaving the trail head, we were hoping to stop for a cold drink and a bite to eat at one of two local restaurants. To our dismay we discovered that one of them “had been closed for years,” even though online it appeared to still offer daily specials, and we were unable to find the other one, despite locals advising us that we could see it from the intersection we were standing in. Google maps also suggested we should be able to see it, but there was only a private residence on the spot. So, we purchased two ice creams from the convenience store, and continued down to the government dock to take a break and enjoy them. 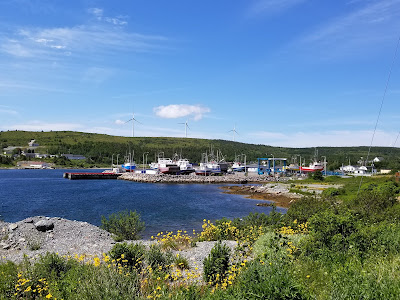 After our short break we continued around the harbour on the road, but we soon became uncertain of where to go, and the instructions on the ECT map were not helpful. We found a gravel track that took us down into a field of junked vehicles and derelict buses. It then climbed steeply uphill through a forested area. We were reluctant to start the steep, rocky climb without being certain it was the right way, but with no other options we headed up. About half way up the hill we saw a small white triangle that marked the trail, indicating we had guessed correctly. 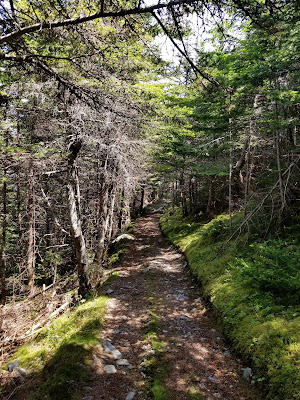 From there we followed markers for a while, until we emerged into a beautiful grassy field that covered in crisscrossing ATV trails and tracks. Unsure where to go, we decided to head down to the coast, thinking we might see the remains of a sunken ship the ECT map mentioned. We came to a lovely looking beach, but had clearly lost the trail. Getting a bit tired of wandering in circles, we headed back up to the field, and decided to ask for directions to the Bear Cove Trail at the cabin at the opposite side of the field. 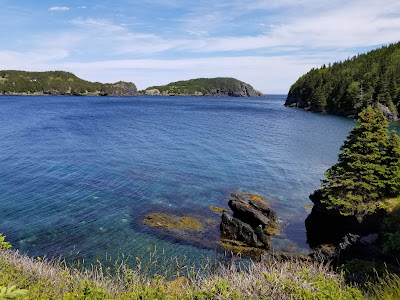 As we approached the grey cabin, we were greeted by Reg and Kathy, the first trail angels we have encountered on the ECT so far. They told us we were on the trail, that it continued up behind the cabin, and that they kept putting up a sign for hikers, but it kept getting taken down. They then invited us inside for tea, coffee, or beer, and told us they make an effort to have fresh water available for hikers passing through. Reg was a larger-than-life character who regaled us with stories of helping other hikers, and local Scout Troops, his life as a truck driver, his family, his pets, his antics in tricking foreigners into thinking he could call moose, and his life growing up in the area and the returning to build his cabin. He showed us photos of his family and the land from the 1950's, when there were no trees at all, which were very interesting to see, given that the area is now forested. The change, which was apparently brought about by natural regeneration alone, was remarkable. It was truly amazing to find these kind, generous, warmhearted people who had found happiness in a simple cabin with a wonderful view. Eventually we left, with two cup-a-soups in hand, grateful for and humbled by their hospitality.

Following Reg and Kathy's directions we continued up the trail into the forest, past an old burnt cabin and the remains of an abandoned community, always keeping to the left. In the next stretch of trail we were surprised and delighted to find well maintained boardwalks, plentiful stairs in excellent condition, and a minimum of mud! It seemed trail maintenance had recently been done, and we were very thankful to the wonderful volunteers who did it! 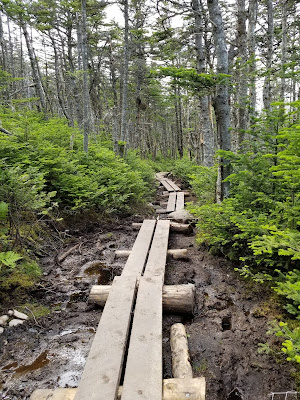 As we neared Bear Cove Lighthouse, we spotted several other tents pitched along the trail. Shortly afterwards we found a sheltered spot near the Lighthouse on which to pitch our tent and set up for the night. We walked down to the Lighthouse, which seems to be under construction, and took a look at the Lighthouse keepers residence. It doesn't seem to be occupied anymore, and is in need of repairs, but it had a quiet beauty to it. Down in the cove below we watched a flock of gulls playing in the wind, a seal fishing, and the waves crashing into the shore. 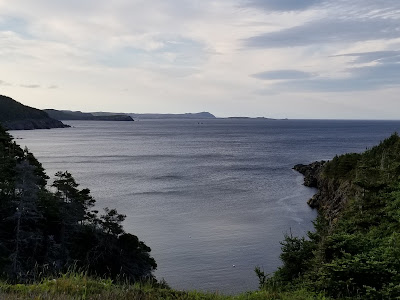 We prepared a dinner of pasta and cheese, followed by the usual cup of tea.  In this section the water is brown, which is not too appetizing, but thankfully it smells and tastes fresh enough. 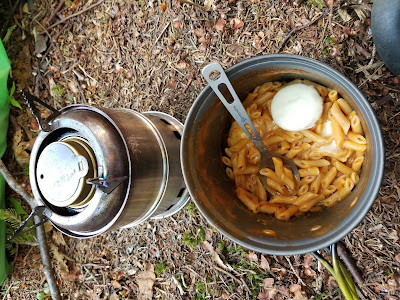