We awoke this morning at 6 am to find a cool, foggy, damp, morning with a slight drizzle.  Our breakfast of warm oatmeal and hot coffee were very welcome.  We have been carrying a tarp that we use to cover the tent on wet nights, and it has kept our tent mostly dry so far, but this morning as we packed up everything seemed distinctly damp.  Soon however a weak sun began to peak through the clouds to bring some warmth, and a light breeze sprang up to help dry things out. 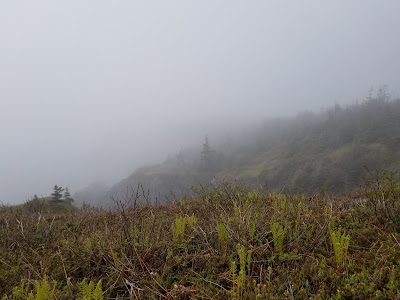 As we set off down the trail we encountered another group of friendly young Newfoundlanders who were off for a weekend hiking/camping trip and welcomed the chance to chat.  They said they had walked from Cappahayden to Witless Bay a year ago, and had loved it so much they were back on the trail again, and hoping to do more this year. 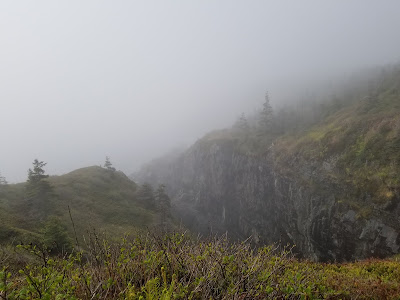 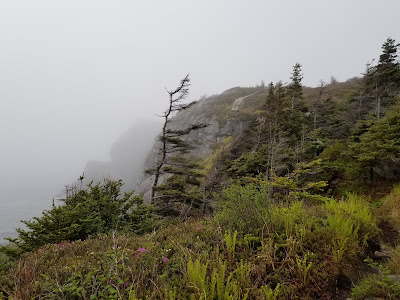 After a trek along open coastline, and a climb up to a mostly wooded section of trail, we came to the lighthouse at the entrance to Bay Bulls.  The trail went right up to the base of the structure, which was an old sturdy pinnacle that has survived on this rough coast, and which was quite beautiful for its endurance and the help it has offered local fishermen. 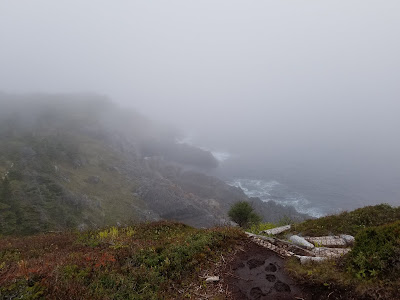 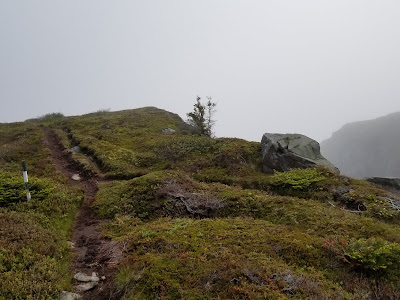 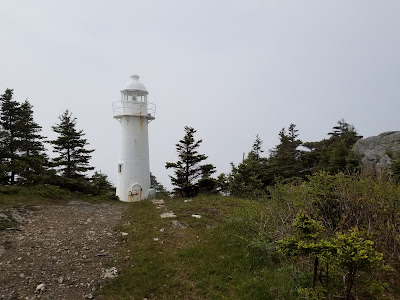 After the lighthouse the trail turned westward along the edge of a deep bay, and it was much easier going as we passed through fields of heather and heath.  By late morning we came to the trail head of the Spout Path, and continued down the road to the town of Bay Bulls. 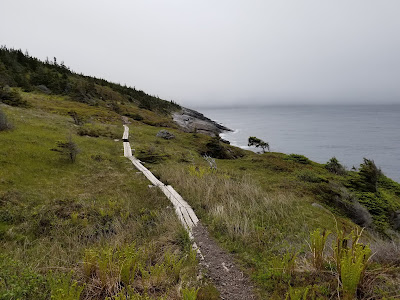 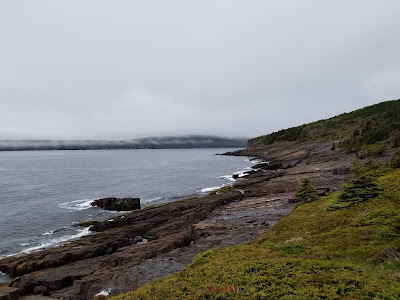 Bay Bulls is one of the oldest communities in Newfoundland and Labrador, having been established as a fishing village.  Fishing remains a core industry in the area, but recently tourism, agriculture, manufacturing, and marine supply services have also become established.  The deep and sheltered harbour of Bay Bulls also makes it an important repair facility for the rigs that drill for oil on the Grand Banks. As such, it seems to be a lively and vibrant community. 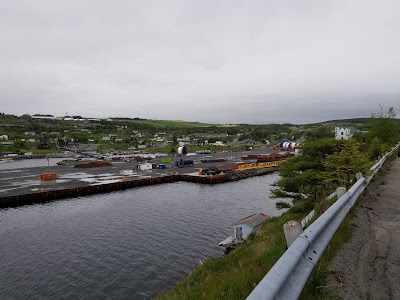 As we walked into town we passed a beautiful, white, clapboard church, whose sides were supported by wooden buttresses and whose steeples were different heights.  It seemed like a curious design.  As we passed the church we came to a solemn veteran's ceremony outside the modern municipal buildings.  All of a sudden we realized, somewhat to our horror, that today is Canada Day!  One of the difficulties with long term hiking is that one has a tendency to forget what day it is, let alone what date.  While this usually doesn't make any difference, it can be a problem if one strolls into town on a Sunday evening or a national holiday, hoping to find stores open for re-supplying.  Well, today was both a Sunday and a national holiday.  Oops.

We continued around the harbour, impressed with the massive rolls and piles of huge chains on the oil rig re-supply platforms, and soon saw the sign for O'Brien's Tours, a company that offers various boat tours around the Witless Bay Ecological Reserve.  We decided to walk in and see if we could change our reservations, and on the way discovered that O'Brien's has a gift shop and restaurant.  We stopped in the restaurant and had a warming lunch of Panini Sandwich and fries with coffee, and also purchased two slices of partridge berry cake for later on. 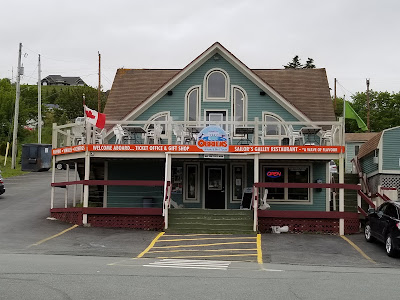 While in the restaurant we were fortunate enough to be able to call the Bears Cove Inn and change our reservations there to tonight and tomorrow, and after lunch we changed our boat tour to tomorrow.  So, everything worked out remarkably well, leaving us with just 7 more kilometers along the Mickeleen's Path to hike until we reach Witless Bay and the Bears Cove Inn!

We set off down Quay Road, the long community connector running through Bay Bulls to join the two ECT trails.  Although there were no signs or indicators along the connector, we managed to find the next trail head without any difficulty.

The Mickeleen's Path was much easier going than anything we have encountered so far.  Much of the trail passed through forest, and the path contained quite a few board walks and staircases to get us over the more difficult and muddy sections. 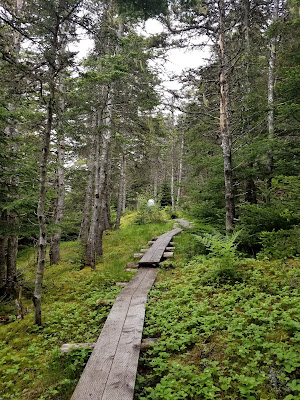 There were many viewpoints out to the ocean, and we are pretty sure we saw two Atlantic Puffins and a Common Murre floating off the coast!  We also passed several coves which are known for otters, although we weren't fortunate enough to spot any, but we did see an abundance of huge banana slugs.  All together it was a short and beautiful hike, with the bunchberry and lupins beginning to bloom, as well as many other pink, purple, and white wild flowers. 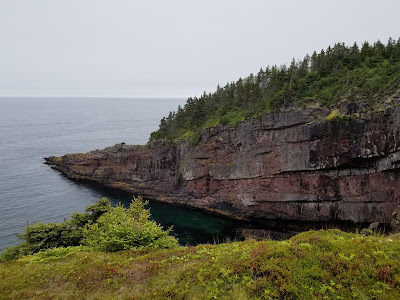 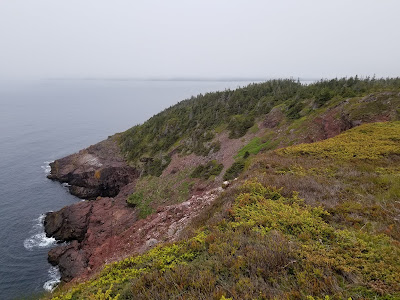 As we approached Witless Bay, we got our first glimpse of the Witless Bay Ecological Reserve, which is has also been designated as an Important Bird Area (IBA). The Witless Bay IBA consists of four islands (named Green, Great, Gull, and Pee Pee) which are located 4 km off the coast, and are all rocky, with low cliffs and steep, grassy slopes.  These islands support a globally significant colony of breeding seabirds, and Great Island is home to the largest colony of Atlantic Puffins in eastern North America (around 200,000 breeding pairs).  Large groups of Leach's Storm-Petrels, Common Murres, Black-legged Kittiwakes, and Herring Gulls also nest on these islands.  Other birds that also nest on the islands include Great Black-backed Gulls, Black Guillemots, Thick-billed Murres, Razorbills, and Northern Fulmars, and the waters surrounding the islands are important for White-winged Surf Scoters, Oldsquaws, and Common Eiders.  Many boat and kayak tours leave from Witless Bay and Bay Bulls to visit the Ecological Reserve, and tomorrow we are taking one! 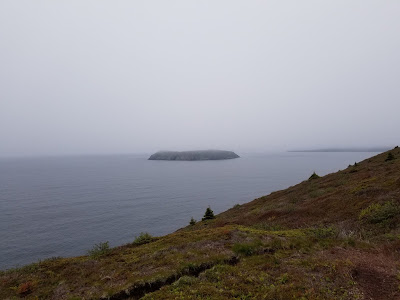 We soon entered the town of Witless Bay which is another beautiful harbour that seems to share a similar history and economic standing as Bay Bulls. 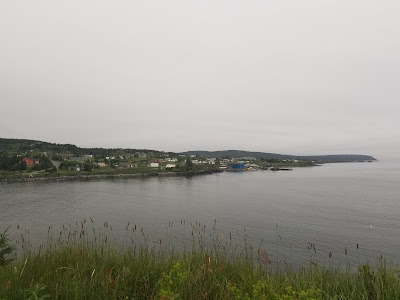 The trail concluded just down the road from the Bears Cove Inn, which was pretty convenient. When we arrived there was no one at reception, but we found a note with instructions for which room was ours, and we were soon happily installed.  When we phoned the owner to inquire about the laundry services that were listed as available online, we learned they were in a laundromat down the road, and the places recommended to us for dinner were also some distance away when travelling on foot. Although the advice was helpful and much appreciated, it was clear the owner was not a hiker. Nonetheless, we soon had our wet gear hung up to dry, and had enjoyed long warm showers! There really is no way to describe the heavenly feeling of a long shower after being on the trail for a few days! 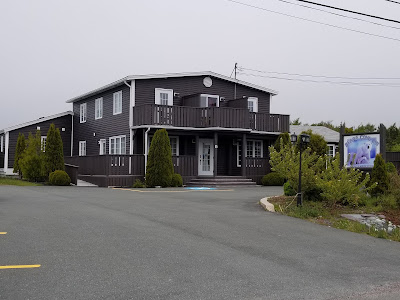 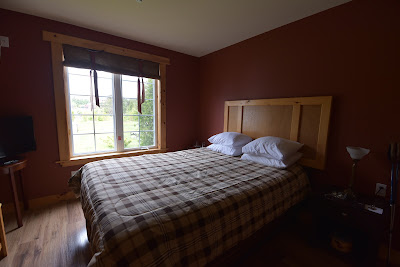 After taking a break we started to investigate our options for dinner. We soon discovered that two of the three places were closed for the holiday, so we decided to walk down the highway to the Captain's Table in Mobile.  This turned out to be a 50 minute walk or so, which demonstrates some other difficulties one can encounter when traveling on foot through many small connected communities, where amenities are often scattered among the towns.

Regardless, the walk without backpacks was refreshing, and on the way we found the River of Boats, which was a really cool diorama on someone's property showing the fishing and oil industries in Newfoundland, as well as some of its history. It is really nice to see that people still have the talent and creativity and take the time to make such interesting things. 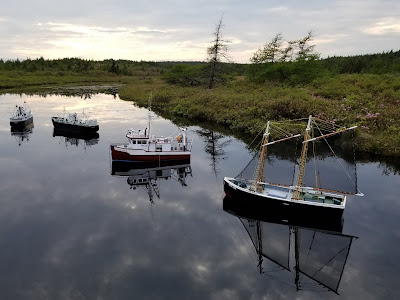 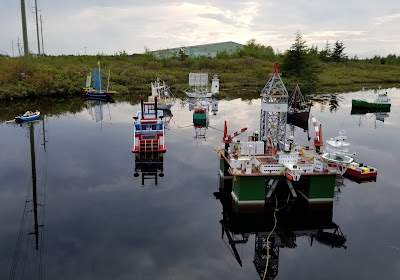 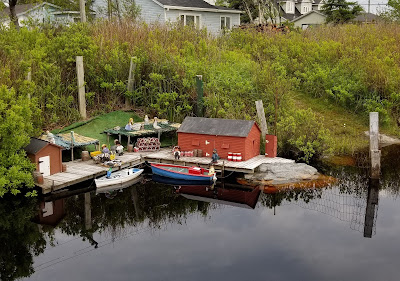 Dinner at the Captain's Table was good. I had a salad and a huge portion of garlic bread, Sean had fish and chips, and we both sampled a pint of the 1892 Quidi Vidi beer. It was a good meal in a place with a great atmosphere, and we thoroughly enjoyed it.